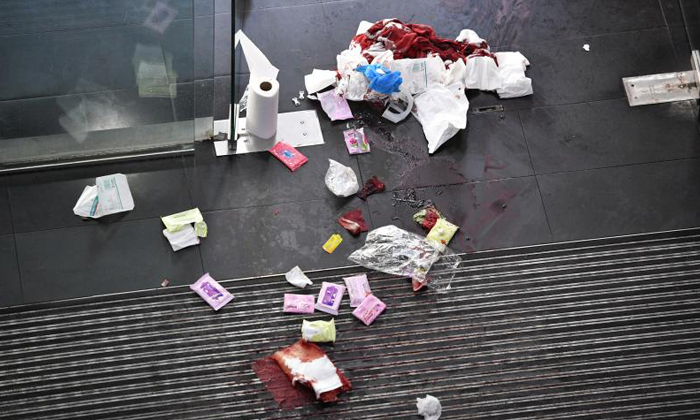 Minutes before he allegedly killed Mr Satheesh Noel Gobidass at Orchard Towers, Tan Sen Yang is said to have slashed a 30-year-old man in the face, an attack so vicious it has left the victim permanently disfigured.

He also purportedly waved a kerambit knife in the air, cutting the right index finger of another man in the process.

Less than 10 minutes later, Tan and several others confronted Mr Satheesh at the mall in Orchard Road.

The 31-year-old was attacked with the same weapon - a curved blade resembling a claw.

An hour later, Mr Satheesh was dead after being stabbed in the neck.

The details emerged on Friday (Oct 1) in court as Tan, now 30, was slapped with at least 10 charges for offences, including multiple counts of assault.

Court documents show that the murder on July 2, 2019, was not the only time Tan allegedly used a weapon.

The prosecution is accusing him of using a knife to stab a man in the chest at a Housing Board void deck in Compassvale Walk on Aug 23, 2016.

The severity of the injury was not mentioned.

In another incident at Orchard Towers, Tan is said to have used a cleaver to attack two men outside the mall at 7.30am on March 22, 2017.

The charges suggest he was violent when unarmed as well.

On Nov 2, 2015, he allegedly punched a man at the Comfort Delgro Driving Centre in Ubi Avenue 4.

He also punched a woman in the face at St James Power Station in Sentosa Gateway on Feb 23, 2017, court documents show.

On June 2, 2019, Tan purportedly sent a woman a text message, threatening to injure a man whom she knew.

The day before the Orchard Towers murder, Tan is said to have been involved in an altercation with a public servant.

He was in Nassim Road at around 4am on July 1, 2019, when he allegedly punched a parking enforcement officer and kicked the man's motorcycle, causing more than $380 in damages.

Tan and several others confronted Mr Satheesh the next day. He and six other people - aged between 22 and 27 at the time - were charged with murder on July 4, 2019.

With the exception of Mr Chan, five of them have been convicted and sentenced to jail.

Mr Chan was given a conditional warning for consorting with a person carrying an offensive weapon in a public place.

Tan Sen Yang's case will be mentioned in court again on Oct 22.