Man dies from injuries after brawl at Orchard Towers, 8 men and women arrested for murder 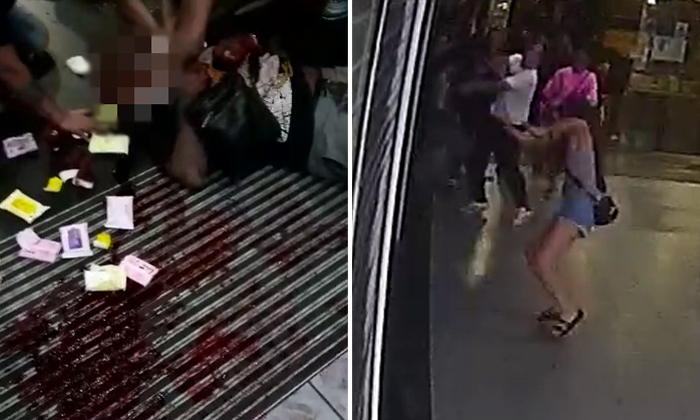 Six men and two women, aged between 22 and 27, have been arrested in connection with the case, which has been classified as murder.

In a statement on Tuesday evening, the police said they had received a call for assistance at Orchard Towers at 6.25am, where they found the victim lying motionless.

A video circulating online show the victim lying bloodied on the floor, surrounded by two men.

Tissue packets were strewn all over the blood-stained floor and one of the men can be heard repeatedly telling the victim to "hang in there".

The police added: "The man was conveyed unconscious to Tan Tock Seng Hospital and was subsequently pronounced dead at 7.25am."

Closed-circuit television (CCTV) camera footage that surfaced online shows how a brawl had broken out at the time of the incident.

According to The Straits Times, shopkeepers at Orchard Towers said they heard people shouting and fighting in the early morning.

According to ST, CCTV footage from a shop on the first floor showed how a group of about 10 men and women had walked towards the victim and struck him after he stepped off the escalator.

The victim collapsed in front of the building's glass doors after several blows.

Through investigations and ground enquiries, officers from the Criminal Investigation Department (CID), Tanglin Police Division and Woodlands Police Division established the identities of the suspects and arrested them within 12 hours.

Four men and one woman will be charged in court on Thursday (July 4) for murder with common intention, which carries the death penalty.

She said: "Our officers displayed perseverance and tenacity in their investigations and intelligence probes, which coupled with the extensive ground work, have resulted in the swift arrest of the suspects.

"The police are committed to keep Singapore safe and we will spare no effort to track down offenders to ensure that they are brought swiftly to justice and face the full brunt of the law."

View more photos of the scene in the gallery.