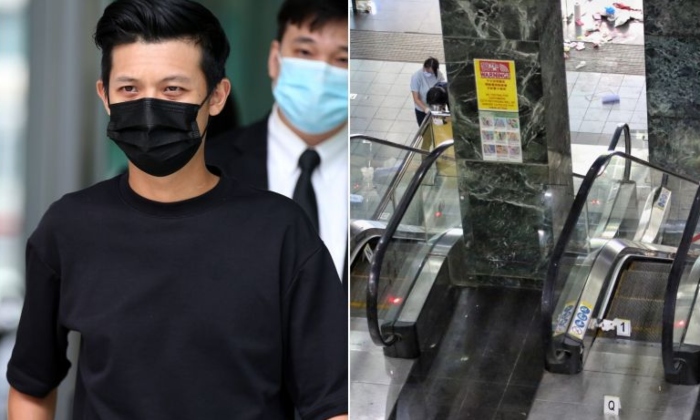 One of the seven people linked to the high-profile Orchard Towers murder in July last year has been given a conditional warning.

Mr Chan Jia Xing, 27, was originally charged, along with six others, with the murder last year of Mr Satheesh Noel Gobidass, 31. His charge was later reduced to that of consorting with a person carrying an offensive weapon in a public place.

On Thursday (Oct 15) afternoon, however, Mr Chan was given a conditional warning. This means that he will have to refrain from any criminal conduct for a year. If he commits an offence within this period, he can be prosecuted again for the consorting charge and for the new offence.

A conditional warning does not amount to a conviction or a finding of guilt, and does not leave a criminal record - meaning that Mr Chan will face no further developments in the case if he manages to remain crime-free for a year .

He is the fourth of seven people linked to the Orchard Towers murder to be dealt with.

The group had gone to the Naughty Girl Club on the second floor of Orchard Towers in the wee hours of July 2 last year. They were about to leave at around 6.20am when they ran into another group walking in, after which a dispute ensued.

Mr Satheesh was killed after he confronted one of the men involved in the dispute who, along with the man's friends, attacked him.

The brawl was captured by cameras placed outside a shop on the first floor of Orchard Towers. Closed-circuit television footage shows Mr Satheesh exchanging blows with some individuals before he stumbles in front of the building's glass doors.

He appears to be bleeding from his neck, and the footage shows bystanders trying to stop the flow of blood.

Mr Satheesh was taken to Tan Tock Seng Hospital but died at 7.25am.

Speaking to the media outside the State Courts on Thursday, Mr Chan said that he had worried about the outcome of his case.

"My parents encouraged me to be strong, and not to do stupid things. I am looking forward to going to work and finding a proper job," he said.

He added that he has not been in contact with the others involved in the case.

"I will remain crime-free not only beyond this year, but for the rest of my life," Mr Chan added.