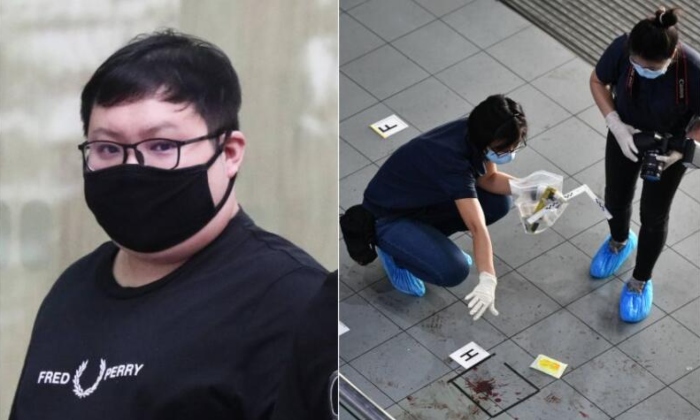 A 27-year-old man linked to the 2019 Orchard Towers murder was sentenced to five months' jail on Friday (Jan 15) for disposing of a bloodstained T-shirt worn by the alleged killer.

He was among a group of seven originally charged with the murder of Mr Satheesh Noel Gobidass, 31.

Loo's murder charge was later reclassified to that of consorting with 29-year-old Tan Seng Yang, who was carrying a foldable karambit knife in the incident on July 2, 2019.

The weapon is a curved blade resembling a claw.

Loo had earlier pleaded guilty to one charge of obstructing justice by disposing of a bloodstained T-shirt worn by Tan, who is the only member of the group still facing a murder charge.

He had also admitted to an offence related to a separate incident in February last year, where he gambled over a game of dice in a public place.

Loo and his six friends had patronised Naughty Girl Club on the second floor of the shopping mall in the wee hours of July 2, 2019.

While in the club, they got into a dispute with another group. The ensuing fight, which Loo tried to stop, saw Tan injure a security officer and another patron.

Loo's group eventually left the club and took the lift to the ground floor of the shopping mall where Mr Satheesh, who was present in the club earlier, confronted one of them.

Several members of Loo's group then attacked him, with Tan inflicting multiple injuries to Mr Satheesh's head and neck area with the knife.

Loo did not join in the assault, court documents state.

The group fled before Mr Satheesh collapsed on the ground. He later died at about 7.25am at Tan Tock Seng Hospital.

Following the brawl, Loo returned home. Tan accompanied him and took a shower there and changed his clothes.

Loo later gave him $50 for transport and a pair of slippers.

When he realised that Tan had left his white bloodstained T-shirt in his bedroom, he disposed of it at a communal rubbish chute. The T-shirt was not found by the police.

The DPPs said he should also be fined $1,000 for the gambling offence.

Loo's lawyers Sunil Sudheesan, Diana Ngiam and Sujesh Anandan asked for their client to be jailed for up to two months, saying in their mitigation plea that he was sincerely remorseful for impulsively throwing away the T-shirt.

Ms Ngiam also told the court on Friday that Loo would not be able to pay the $1,000 fine, and asked for him to be jailed for up to an additional five days instead.

For intentionally obstructing justice, Loo could have been jailed for up to seven years and/or fined.

Tan is the only member of the group still facing a murder charge. His case will be heard in the High Court.

Four others were dealt with last year.

Mr Chan Jia Xing, 27, was given a conditional warning for consorting with a person carrying an offensive weapon in a public place.

A conditional warning does not amount to a conviction or a finding of guilt, and does not leave a criminal record.

Natalie Siow Yu Zhen, 24, was sentenced to five months' jail for assault and for being in the company of Tan.

Hotel receptionist Ang Da Yuan, 27, was sentenced to eight months' jail and six strokes of the cane for assault and being in the company of Tan.

The case against Tan Hong Sheng, 23, who faces a consorting charge, is pending.

Those convicted of consorting with a person carrying an offensive weapon in a public place can be jailed for up to three years and receive at least six strokes of the cane.

A conviction for murder carries the death penalty.