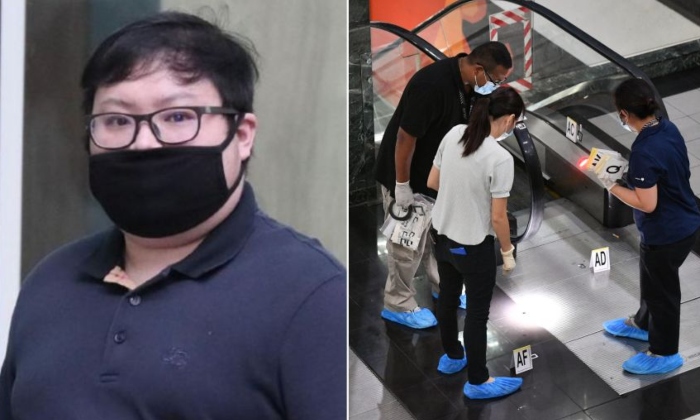 A man among the seven people linked to the Orchard Towers murder in July last year pleaded guilty on Monday (Dec 14) to obstructing justice by disposing of a bloodstained T-shirt worn by another man involved in the incident.

Loo Boon Chong, 27, was initially charged with the murder of Mr Satheesh Noel Gobidass, 31. His charge was later reduced to that of consorting with Tan Sen Yang, 28, who had the karambit knife - a curved blade resembling a claw - on his person at the time of the incident, as well as another charge of preventing justice.

The consorting charge will be taken into consideration for his sentencing.

Tan Sen Yang still faces a murder charge. His case and that of Tan Hong Sheng, who faces a consorting charge, are pending.

On Monday, Loo also pleaded guilty to another charge in a separate incident in February, when he gambled over a game of dice in a public place.

Regarding the Orchard Towers incident, the court heard that the group had gone to Naughty Girl Club on the second floor of the shopping mall in the wee hours of July 2 last year.

When Loo was leaving Orchard Towers at about 6am through the ground-floor entrance, Mr Satheesh came down alone. He had also been in the Naughty Girl Club when an earlier dispute had occurred.

Mr Satheesh confronted a member of Loo's group and some other members of the group retaliated by attacking him. Loo did not join this attack.

Mr Satheesh died later that day. According to court documents, the cause of death was a stab wound to the neck.

Following the brawl, Loo let Tan Sen Yang shower and change his clothes at his home at the latter's request. Loo also gave him $50 for transport and a pair of slippers.

Loo later realised that Tan Sen Yang had left his white bloodied T-shirt in his bedroom and disposed of it at a communal rubbish chute.

The blood-stained T-shirt was not found by the police.

Loo is expected to appear in court on Jan 15 for sentencing.

Four others in the group have been dealt with in court.

If Mr Chan commits an offence within one year, he can be prosecuted again for the consorting charge and for the new offence.

In October, Siow was sentenced to five months' jail for assault, and to being in the company of Tan Sen Yang, who had a karambit knife in his possession.

In March, office administrator Joel Tan was jailed for four weeks for assault, while hotel receptionist Ang Da Yuan was sentenced to eight months' jail and six strokes of the cane for assault and being in the company of Tan Sen Yang.

The Attorney-General's Chambers said in October that it had asked the police to investigate social media users who alleged that members of the group were given preferential treatment in sentencing on account of their race.

It refuted claims that the courts impose sentences based on the race of offenders, and said it will not hesitate to take action against those who make such allegations.

If Tan Sen Yang is convicted of murder, he will face the death penalty.

For intentionally obstructing justice, Loo can be jailed for up to seven years, fined, or both.