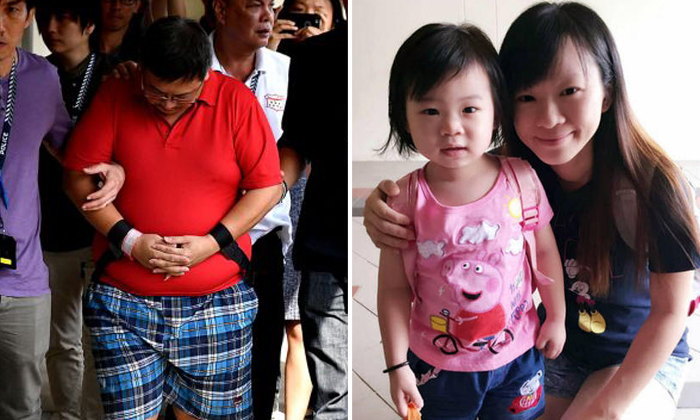 A former property agent was sentenced to death on Thursday (Nov 12) after he was found guilty of murdering his pregnant wife and their four-year-old daughter.

"This is a tragic case. It is a case of lives lost, a family torn asunder," said High Court judge Kannan Ramesh as he delivered his decision.

Teo Ghim Heng, 45, had strangled his wife, Madam Choong Pei Shan, 39, a housewife who was six months pregnant, and daughter Zi Ning in their Woodlands flat on Jan 20, 2017.

He spent a week with their bodies in the flat before setting the corpses on fire, the court heard in a trial that started in July last year.

The judge rejected the defence's arguments that Teo was suffering from depression and that he had been provoked and lost control after his wife called him "useless" him in front of their daughter.

Teo and Madam Choong married in 2009, and it was the second marriage for both.

He used to be a successful real estate agent but in 2015, his income dropped when the property market cooled.

In late 2016, he took on another job as a sales coordinator with a renovation company.

But the family's expenses remained unchanged, and with Teo's weakness for gambling, he became mired in debt. This led to frequent quarrels.

On Jan 18, 2017, the couple argued again over the family's finances. During the quarrel, he brought up an extramarital affair that Madam Choong had in 2014.

On the morning of Jan 20, 2017, Teo decided not to take Zi Ning to school as her fees were overdue.

On learning this, Madam Choong berated Teo for being useless.

According to Teo, a "red mist" descended upon him and his mind went blank. He strangled her with a bath towel, before using his bare hands to make sure she was dead. He then strangled his daughter.

Justice Kannan said Teo's behaviour before and after the offences did not paint a picture of someone who was suffering from depression.

Among other things, the judge said Teo's frequent visits to pornographic websites before and after he killed his wife and daughter did not square with his claims that he had lost interest in sex.

The judge also noted that after the killings, Teo spent his time surfing the Web and watching videos, left the house for meals when he was hungry, and slept regular hours.

"There did not appear to be, on the evidence, any mourning or despondency on the part of the accused, despite the demise of his wife and child," said Justice Kannan.

To buy himself time when Madam Choong's family was looking for her, Teo accessed her Facebook page to change her cover photo to keep up the facade that she was alive.

Teo also fabricated four "suicide notes" and later lied to the police that Madam Choong had a hand in writing them.

The judge said it was "difficult to understand" how someone who behaved in such a way can be said to be suffering from major depressive disorder of moderate severity.

Justice Kannan said the sequence of events clearly showed that Teo was in full control of his faculties.

As he was doing this, he told her in Mandarin that "we owe too much money, you leave first. Zi Ning and I will join you shortly. I don't want you and Zi Ning to have to bear the burden of my debt after I (am) gone".

Justice Kannan said: "This was not the behaviour of a person who had lost his senses in blind rage - far from it, the accused's conduct was conscious, deliberate and outcome-driven, certainly after the mist had cleared."

The judge also found that Teo had a "clear mind" when he killed Zi Ning - he had asked the girl to sit on his lap before strangling her, and as the girl struggled, he told her to "leave first" and that he would join her.

"Such behaviour shows full control on the part of the accused... He knew exactly what he was doing, and his actions were goal orientated," said the judge.

Moreover, Zi Ning was not a participant in the heated argument between Teo and Madam Choong.

"Zi Ning was not at fault for Pei Shan's behaviour. She was an innocent. It is inconceivable that the accused could have blamed Zi Ning for anything that transpired on the morning of 20 January 2017," said the judge.

After Teo's conviction on the two murder charges, a third charge of killing his unborn son was withdrawn by the prosecution.

Teo's parents and brother were in court, but declined to speak to the media.

His lawyers, Mr Eugene Thuraisingam and Mr Suang Wijaya, said he intends to appeal against the court's decision.