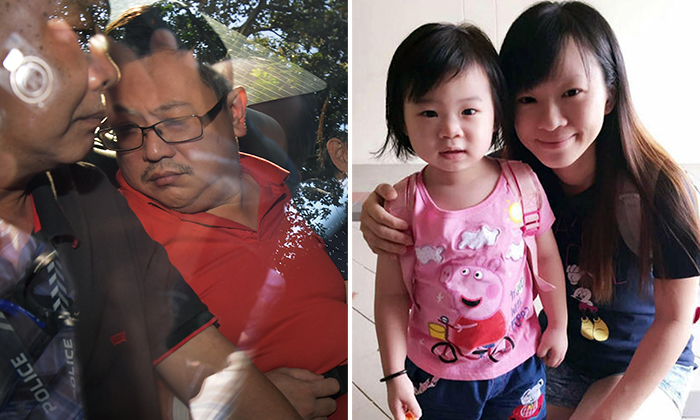 A 44-year-old man, on trial for murdering his pregnant wife and four-year-old daughter three years ago, told the High Court on Tuesday (Jan 28) that he had been unable to pay off his mounting debts and the best option was for his whole family to die.

Teo Ghim Heng had strangled his wife after she scolded him for being "useless", and then strangled his daughter. He then spent a week with their bodies in their Woodlands flat.

He said he tried, but failed, to end his life by cutting his wrist and downing more than 100 paracetamol pills. He also tried to kill himself by setting the corpses on fire but chickened out at the last minute.

Teo, a former property agent, is charged with murdering his wife, Madam Choong Pei Shan, 39, and daughter, Zi Ning, on Jan 20, 2017, with the intention of causing death, which carries the mandatory death penalty.

The trial, which started in July last year, resumed on Tuesday with Teo taking the stand.

In November 2016, he started working as a sales coordinator with a basic monthly salary of $1,500.

It was after this that they often quarrelled, he said.

However, prosecutors produced 179 pages of chat messages that the couple exchanged between Oct 14, 2016, and Jan 18, 2017, to show she had known about his financial difficulties before the date he claimed.

In their text messages, written in English, the couple habitually expressed their love for each other - she would remind him to eat his lunch while he would tell her that he missed her, their daughter and their unborn son, whom he dubbed "small small baby".

On Jan 10, 2017, Madam Choong wrote: "Baby I'm sorry. I felt so helpless that I can't help you to pay all the debts and you have to pay alone. I know your limits. Please wait for me after our son is two years old then I can go back to work. At least both of us can work and clear our debts."

In response, Teo wrote: "Ok baby it is my duty to work for the house. I will work harder to settle all our debt."

Deputy Public Prosecutor Han Ming Kuang said she knew that Teo's car had been repossessed, that credit card payments were outstanding, and that he had trouble paying Zi Ning's school fees.

The DPP also pointed out that the couple considered an abortion in November 2016 due to financial reasons, but eventually changed their minds after counselling.

Teo said that his wife was only aware of certain debts.

The DPP also contended that Teo never forgave Madam Choong for having an extramarital affair in 2014 and that he used to cancel his appointments to carry out "spot checks" on her, which affected his sales volume.

Teo said that he had forgiven her.