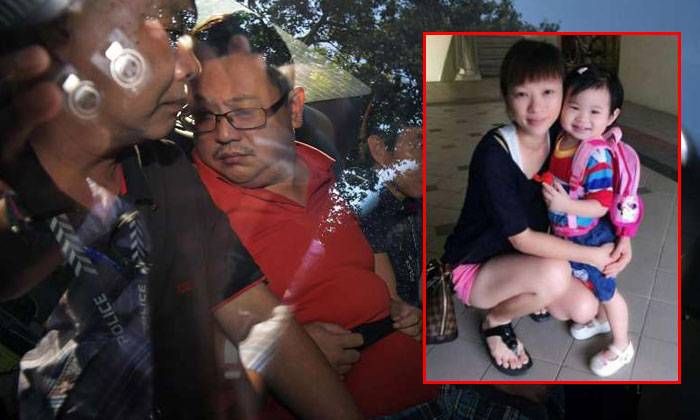 One week before Chinese New Year in 2017, debt-ridden property agent Teo Ghim Heng strangled his wife, who was six months pregnant, and their four-year-old daughter.

He slept on the same bed as the bodies for one week in his Woodlands flat, with the air-conditioner turned on to delay the decomposition process.

He searched the Internet for ways to commit suicide, leaving the flat only to buy food and air freshener.

He then set the bodies on fire, claiming that he had also tried to kill himself in the blaze but aborted his attempt as it was too hot.

He gave excuses when his wife's family asked about her whereabouts and they eventually called the police on the first day of Chinese New Year.

The details surrounding the tragic deaths of Teo's wife Choong Pei Shan, 39, her daughter Zi Ning, and unborn son, emerged on Tuesday (July 2) as prosecutors set out their case against him for a double-murder on the first day of his trial.

Teo, 43, is charged with two counts of murder for killing his wife and daughter on Jan 20, 2017, with the intention of causing death, which carries the mandatory death penalty. A third charge of killing his unborn son has been stood down for now.

The High Court heard that Teo was an avid gambler who racked up debts of at least $120,000 at the end of 2016, but kept his wife in the dark about the extent of his debts.

He listed the flat for sale and took on another job as a sales coordinator.

"The accused felt that Pei Shan should have contributed to the household income by working. He also never fully forgave her for an affair she had a few years back, and strongly suspected that Zi Ning was not his biological daughter," said Deputy Public Prosecutor Han Ming Kuang.

According to Teo's statements to the police, he and Madam Choong, a housewife, had an argument on Jan 18, 2017, about his financial problems. He told her he owed a total of $70,000 and could not pay their daughter's kindergarten fees.

Two days later, the couple argued about money again in the master bedroom.

Teo told police that he looped a towel around Madam Choong's neck and pulled both ends for about 15 minutes, and then strangled her with his bare hands until she stopped breathing.

He then did the same to his daughter.

Teo claimed that he tried to take his own life after killing his wife and daughter. This included setting fire to the two bodies and then lying on the bed next to them.

On Jan 23, three days after the killings, three of Teo's colleagues went to his flat to look for him as he had not shown up for work.

But Teo refused to leave, even after one of them tripped the main power switch outside in a bid to force him to open the door.

He also repeatedly lied to his and his wife's families to explain their absence at Chinese New Year gatherings. He told them that Madam Choong was ill and used her phone to communicate with her family members and Zi Ning's teachers.

On Jan 28, the first day of Chinese New Year, Madam Choong's brother Gordon came knocking at the door but got no response.

That same day, Teo used a payphone at the void deck to call his mother-in-law and mother, lying that his wife had kicked him out of the flat, Deputy Public Prosecutor Dillon Kok told the court.

Madam Choong's family was suspicious and returned to the flat. When Mr Gordon Choong detected a pungent odour, he called the police.

Just as firefighters were about to force their way in, Teo opened the door. As Mr Choong shouted at him, Teo calmly told him that Madam Choong was dead.

Teo then told police officers in Mandarin: "It was my fault." He claimed he set his wife and daughter ablaze as they slept earlier that day.

After he was arrested, he claimed that he had made a suicide pact with his wife a few weeks before. She killed their daughter while he killed Madam Choong and he was supposed to kill himself, he said.

He repeated this to the police the next day, but later admitted that he strangled his wife and daughter.

Teo also showed police four suicide notes that he claimed was written by his wife and himself. Handwriting analysis concluded, after comparing the notes with 40 samples of Teo's handwriting, that these were probably written by him.

Forensic pathologist George Paul found bruises on Madam Choong's neck and concluded that she was strangled, while Zi Ning's death was found to be consistent with smothering. The foetus died because of Madam Choong's death.