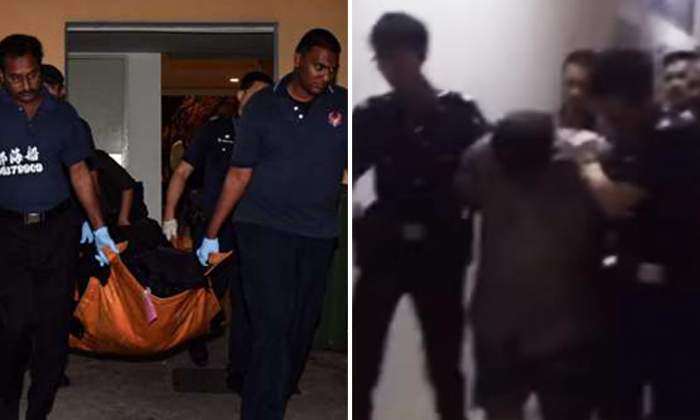 A 39-year-old woman and her four-year-old daughter were found dead in the bedroom of their flat on the first day of Chinese New Year (Jan 28).

Police received a call at 6.35pm requesting for assistance at a sixth floor unit at Woodlands Drive 52, Block 619, and found the bodies.

The mother, believed to be Madam Choong Pei Shan, and child were pronounced dead around 7pm by paramedics on the scene.

A 41-year-old man, believed to be the woman's husband, Mr Teo Ghim Heng, was detained and arrested at the flat in connection with the case.

When The Straits Times arrived at the scene, there was an acrid burning smell in the air and police were looking in the rubbish collection point for evidence.

While the cause of the pair's death is not known, it is believed to be related to the burning smell.

A neighbour who lives a few units down said the couple, who moved into the unit about five years ago, mostly kept to themselves.

A transport supervisor, 47, who wanted to be known only as Mr Mie, said that he had noticed the smell of burning plastic when he left the house at about 7am that morning (Jan 28).

"At first, I thought people were burning things for Chinese New Year, but when I returned in the evening around 5pm the smell was still there."

Mr Mie said the man worked in the property industry and was reserved.

The woman, who was a housewife, was friendlier and would often smile whenever he greeted the family.

Mr Mie last saw her on Monday or Tuesday morning hanging clothes outside their home.

He said he only realised that something was wrong on Saturday (Jan 28) evening when he heard noises in the corridor and saw Singapore Civil Defence Force (SCDF) officers outside the unit.

"It was very quiet before that, no shouting, no screaming," he added.

The SCDF sent one fire engine, one red rhino, one ambulance and a support vehicle to the scene when they received a call for assistance at 6.30pm.

The Straits Times understands that there was no fire when the authorities arrived at the scene.

Police are investigating the unnatural deaths.

Related Stories
Mother and BF charged for raping, killing and chopping up 14-year-old adopted daughter
Man on trial for killing 'godmother': He allegedly suffocated her with pillow choking her
death
dead
murder
woodlands
mum and daughter dead in Woodlands