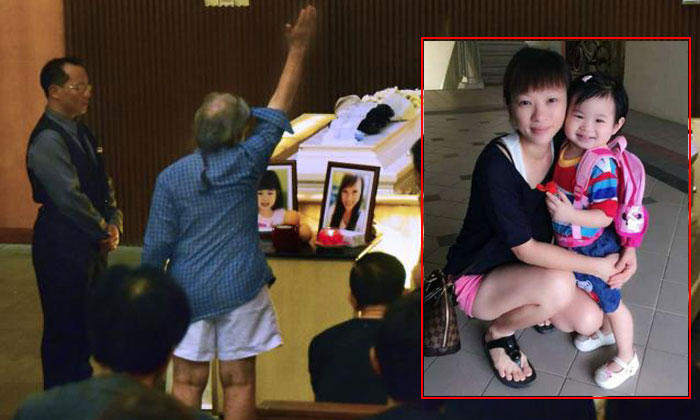 The mother and daughter pair found dead in a Woodlands flat were cremated at Mandai crematorium on Wednesday.

Madam Zhong Peishan, 39, and her four-year-old daughter Teo Zi Ning were found dead in their Woodlands flat on the first day of Chinese New Year.

According to reports, the woman was allegedly killed more than a week earlier. She was six months pregnant with a boy when her body was found.

Her husband, Teo Ghim Heng, 41, has been charged for her murder.

Madam Zhong's parents were at the wake and also at the Mandai crematorium yesterday.

Lianhe Wanbao reported Thursday that her father, Mr Zhong, refused to allow workers to proceed with the cremation, repeatedly pleading for more time with his daughter and granddaughter.

According to Lianhe Wanbao, he called out while standing in front of their coffins: "(Dad) will always love you, have a good journey, look forward, don't look back."

Mr Zhong also brought those gathered at the crematorium to tears when he recited the nursery rhyme 'Baa Baa Black Sheep' to his daughter.

Speaking out loud, he said it was the first song that he taught her to sing, and that she should sing it to her unborn child.

Teo, a Singaporean property agent, is accused of killing the housewife in their sixth-storey flat at Block 619, Woodlands Drive 52 between 8am and 11am on Jan 20.

His case will be mentioned again on Feb 6.