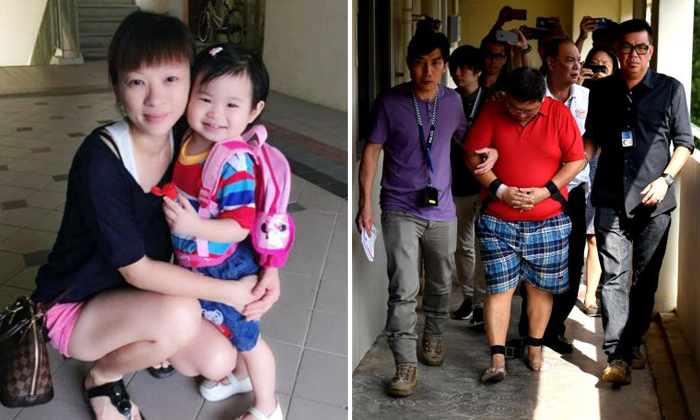 Before he allegedly killed his pregnant wife, accused murderer Teo Ghim Heng recalled her saying to their daughter: "Zi Ning, look at how useless your father is."

That was the last thing Madam Choong Pei Shan, 39, said to their four-year-old daughter, before the woman and the girl were strangled, the High Court heard yesterday.

Teo's account of an argument that transpired on the morning of Jan 20, 2017, shortly before he allegedly murdered his wife and daughter, emerged on the second day of his trial.

After the alleged double murder, he is said to have spent a week in the Woodlands flat and burned their bodies.

The deaths were discovered on Jan 28, the first day of Chinese New Year, after Madam Choong's family called the police.

In a statement to the police after his arrest, Teo said that on the morning of Jan 20, his wife had questioned why their daughter was not going to school, after Madam Choong saw that he had changed Zi Ning out of her school uniform.

The former property agent said he told his wife that he did not have money to pay the girl's school fees, and if the girl went to school, it would be embarrassing if she were told to leave.

He said Madam Choong then chided him, saying: "Other families can take care of three kids, you can't even provide for a family with one child. You're so useless."

Teo said he "tuned out" her nagging at one point but remembered that she used "very sarcastic and hurtful words" and he remembered anger slowly building inside him.

The statement was read out by Teo's defence lawyer, Mr Eugene Thuraisingam, when Madam Choong's brother Gordon was on the stand.

Earlier, Mr Choong had described his sister as a "soft" and "kind" person who did not engage others in quarrels. He agreed when Mr Thuraisingam asked if it was unusual for his sister to say such words as described by Teo.

Most of the proceedings yesterday dwelt on Teo's financial difficulties.

The former principal of the Little Tree House childcare centre that Zi Ning attended, Ms Faizahhanimi Ahmad, testified that at the time of the killings, Teo owed fees for two months.

She said Teo used to be prompt in payment, but from mid-2016, he was either late or defaulted on paying the monthly fees of $850.

She told the court that in January 2017, Teo told her not to talk about school fees in front of Madam Choong as his wife was "pregnant and emotional".

Ms Faizahhanimi said the couple usually dropped off and picked up Zi Ning together, but on the evening of Jan 19, Teo came alone.

Four former colleagues of Teo were also called by the prosecution to testify that he had borrowed large sums of money from them or requested for salary advances.

They also talked about his gambling habit, saying that he could lose as much as $2,000 during a mahjong session and had placed bets of as much as $700 a week on 4-D.

However, they said Teo loved his wife and daughter very much.

Teo's supervisor at a renovation company where he was a sales coordinator said the accused requested to leave the office daily at 4.30pm to pick up Zi Ning and buy dinner for his family, before returning to work.

The boss, Husniyati Omar, who is currently serving a sentence for a renovation scam, testified in her prison uniform.

Teo's mother and brother also took the stand, saying that he did not tell them of any financial problems.

As for his wife's family, Mr Choong told the court that his parents have been suffering after the incident.

"Every year, Chinese New Year to us is a torture," he said in court.