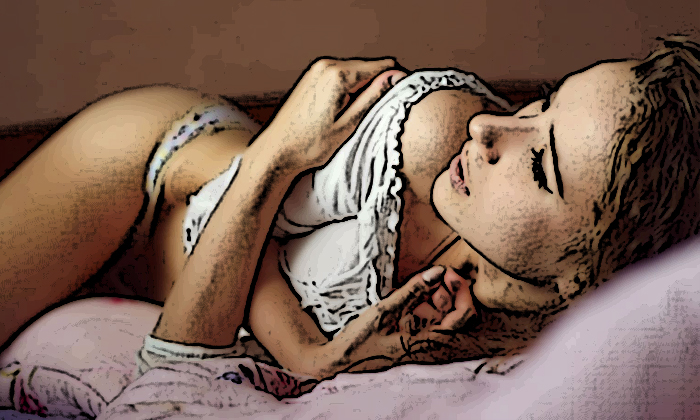 Even though her colleague was twice her age and already had a wife and kids, she could not help but lust after him. As told to Simply Her writer Gemma Koh:

“I noticed the suave, older man in the office almost instantly. I was then only a 22-year-old intern but he caught my eye with his expensive well-cut suits and big, shiny shoes. He didn’t seem to talk to the women in the office and this made him all the more mysterious.

At that time, I was in a relationship with a childhood friend. But it didn’t stop me from fantasising about what it would be like to date this older man. I developed such a crush on him, I even went to Metro to sniff bottles of cologne till I found the scent he used. While I was out shopping, I would also stop by the fragrance counters just to smell that particular scent.

About six months later, I was offered a full-time position at the company. My new boss turned out to be my mysterious man and I discovered that he was almost twice my age. I also learnt that he had a family when I answered phone calls from his wife and children. Yet, I continued to lust after him.

As a boss, Henry* was strict and straightforward. He initially thought I was an irresponsible kid, but his attitude softened when I showed concern for a colleague who was ill. Henry started personally grooming me to take on more responsibilities at work. He chided me about my dressing and advised me to wear longer skirts, and more sober colours – I liked bright clothes and short, tight skirts.

During lunch one day, he took me shopping and picked out suitable skirts and shoes for me to try. It was like Richard Gere and Julia Roberts in Pretty Woman, except Henry didn’t pay for my shopping. Henry and I soon started having lunch together, and he would give me rides home from work.

Despite our age difference, we got along well and were on the same frequency. One evening, he told me he found me attractive and asked if I wanted to follow him home. He was well-mannered and wasn’t sleazy about it. I coyly asked what for; he replied: ‘Just for tonight.’

Having sex with Henry was something I had always fantasised about and even though I was flattered with his offer, I said ‘no’; I didn’t want him to think I was easy. Thankfully, my rejection didn’t seem to affect our working relationship and Henry remained gentlemanly towards me.

I believed Henry sincerely felt for me – mentally and emotionally. So a week later, when he sent me home, I told him I was ready if that was still what he wanted. My body trembled as I unlocked the door to my home. It was going to be my first time with another man other than my boyfriend.

But Henry made things easy. He asked: “Shall we go into your room?” and then made me sit on my bed and very slowly, kissed me. The rest, as they say, is history.

In my mind, this was going to be a one-off thing. It satisfied my curiosity about what it would be like to make love to an older, more experienced man, but it also made me crave for more. It wasn’t just Henry’s technique. Unlike my boyfriend, Henry was caring and attentive in bed – and I didn’t feel like just a log lying there. He also told me that I took him to such a high that he wanted to do it to me all over again.

After we became lovers, Henry and I would fondle each other in the office when no one was around. None of our colleagues suspected what went on when my boss asked me into his room to help him, because everyone thought I was just a kid.

We started going to cheap hotels twice a week after work. Henry was very experienced and knew exactly what to do with my body. He taught me all kinds of sexual techniques to please him. When we went on holidays together, it was very romantic; Henry would arrange to have flowers scattered all over our hotel room and in the bathtub.

My parents soon became suspicious about my boss driving me everywhere but left me alone.

My boyfriend didn’t like that I was spending so much time with Henry, but couldn’t do much as he was often out of the country, busy with his family business.

I met Henry’s family when he invited our team at work to his home for dinner. While our colleagues were in the living room and his wife was upstairs with their kids, we even indulged in a quickie in the kitchen. We were adventurous and loved the danger. I didn’t feel guilty about what we were doing – if he and his wife had shown love towards each other, I would have walked out. But whenever I saw them together, they were cold and abrupt with each other.

In contrast, Henry and I were very similar in character, and had similar interests like running and doing volunteer work. He made me feel good about myself. He showed me love and in return, I was able to love back – I was less spoilt, and less quick to judge others as well.

Henry left the company a year after we became lovers. By then, I was in love with him, and broke things off with my boyfriend whom everyone had expected me to marry. I also couldn’t imagine myself working for my boyfriend’s unglamorous family business for the rest of my life.

One night, Henry told me he loved me and I believed him. He also started confiding in me about his marital problems. Even before he met me, he didn’t know what his wife did while he was at work or how she was spending his money.

Despite that, I often felt very down about this clandestine relationship. I couldn’t meet his friends and likewise, I was jealous of my friends who could take their other halves along to gatherings. I also never knew when he was going to call when he was with his family, and would often pick up my homephone to check that it was working.

Yet, I had never asked him to leave his wife. Once, he promised me he would marry me when all his children got jobs and I brushed it off, joking that by then, I would be 50.

Five years into our relationship, I moved out of my parents’ home and started living on my own. Henry would spend weekends at my flat, telling his family that he had gone to Malaysia to play golf. We were like a normal couple – cooking dinner, cuddling and watching TV together.

When I changed jobs, my new colleagues were curious about my secret lover, whom they would only see when he picked me up from work or sent me to the airport for work trips. It was an open joke that he was my uncle.

My new boss, who guessed that he wasn’t, warned me not to get involved too deeply; she was afraid I would get hurt. ‘The relationship won’t go anywhere,’ she said. ‘They always go back to their wives.’

One day, about 10 years into our relationship, Henry said: ‘Dear, don’t you think it’s about time we moved in together?’ I agreed because I was so happy to have him to myself. I thought he had finally left his wife.

After he moved in, I noticed a change in Henry – he was more relaxed, and less stressed about life.

At the same time, I had to get used to living with him and little things started to annoy me, like how he didn’t clean the bathroom sink after he rinsed his shaver.

I was also hurt that even after we moved in together, Henry refused to hold my hand when we were out in case we encountered people we knew. He still wouldn’t introduce me to his friends nor accompany me to meet my friends. He wouldn’t tell his family about us, even though his children suspected because they always saw us together.

Once, I suggested: ‘Isn’t it about time you divorced your wife?’ He kept quiet and I didn’t bring it up again after that.

The End Of The Affair

Fast forwarding to about five years after Henry moved in, I was in-between jobs and decided to spring-clean when I discovered a document in one of Henry’s boxes with his and his wife’s name on it. I stared at the date of the document to make sure I was seeing it correctly – they had divorced just before he moved in with me.

I always thought I would be so happy the day that he was finally all mine, but I felt so numb and betrayed finding it out this way, I couldn’t cry.

When Henry came home from work, I was calm when I confronted him but he couldn’t give me a satisfactory answer. I felt that he didn’t trust me by not telling me about his divorce; my love for him dissipated in that instant. I told him it was over and that he needed to move out.

Henry didn’t try to persuade me to change my mind, and we haven’t stayed in touch since he left.

I want to fall in love again but this time, I want a man who will introduce me to his family, hold my hand and show me off to his friends. I don’t regret falling in love with Henry, but I would warn women not to get involved with married men because it can be very lonely. You don’t know when they will call and you always have to stay hidden from their friends.

It’s scary being single because I don’t know what the dating game is like. I’ve been going to the gym regularly so I still look good for my age. And while I’ve started going out with big groups of friends, I’m not yet ready for another physical relationship – I cringe whenever a guy tries to put his hand around my waist. Also, I’m not sure why, but the guys who’ve shown interest in me are usually in a relationship; I’m very good at spotting them – they answer their phones whispering ‘Hi, honey,’ to their partners, thinking I can’t hear.

I’m still asking myself: When I find love again, should I confess to my new man about my affair with Henry? I don’t want the guy to judge or use it against me later on. What should I do?”

Related Stories
7 years of marriage and 3 kids -- but my cheating husband has been lying to me long before that
'He cheated on me over and over again, was accused of molestation during my pregnancy, and hit me when we quarrelled'
"I found out my husband was sleeping with social escorts and having cybersex with other women"
'My husband ran off with my best friend -- and her partner was the one who told me'
'My husband was having an affair with my friend and her hubby told me'
'My wife refuses to have sex with me, I think she's cheating on me with our relative'
'My husband's sister acted like she owned him and made my marriage a nightmare'
Hubby left wife after she refused to let him speak to female colleague
'My hubby goes out with single women -- and he thinks there's nothing wrong with it'
'I slept with a relative and now I can't end the affair'
'My cheating husband brought our daughter to meet his mistresses'
'My husband cheated on me, so I got back at him by having an affair too'
affair
couple
cheat
cheating
relationships
confession