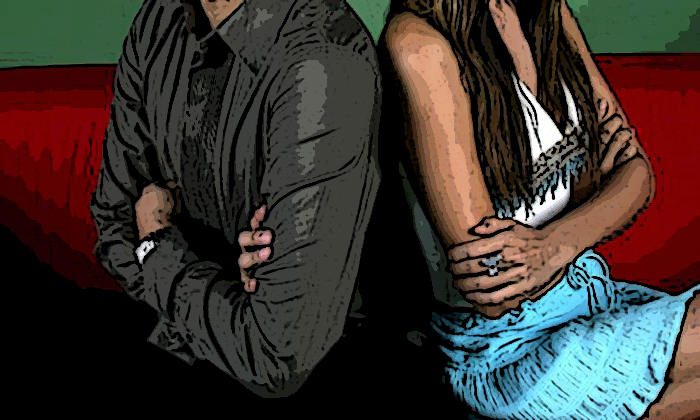 I married my husband in 2008. We were introduced by his sister's friend. He was a divorcee. From what I know from his sister, he was only married for 52 days before his wife ran away. His sister also mentioned that his first wife was suspicious of their brother and sister relationship.

So I put my trust in S (my husband) and married him. What followed was a nightmare for any girl.

His sister acted as though she owned him. The way they talked to each other, you would think they were newly-weds and I was the lamp post hovering over them.

I felt so lonely and unloved. On top of that, his mother found fault with everything I did. When I became pregnant a few months later, the torture from his sister and his mother became unbearable.

When he was at home, they treated me with love and respect. The moment he stepped out of the house, the scenario changed. I was not even allowed to go into the kitchen.

At one point, I couldn't take it anymore, so I sent his sister an e-mail to give her a piece of my mind. I did not want her to make a scene at home as my father-in-law was quite sickly.

I asked her why she needed to find him a wife when it was obvious that she did not want him to be with his wife, and she could have married him instead. She freaked out, took MC that day, and created a big hullabaloo at home. My mother, my brother and my grandmother went to their house to sort things out.

My sister-in-law claimed that I was carrying my brother's baby. The whole situation turned really ugly. My brother got very angry and I wished he had slapped her then.

His mother called me a gold-digger though all they own is a small house and a Kancil.

My husband left me and our daughter seven years ago to be with his mother and sister. His sister got married in 2012 and bought a house near her mother's house and frequently visits her mother. However, I was beaten whenever I visited my mother.

Now my ex-husband has started visiting our daughter at her school. I do not know what his agenda is, but it's creeping me out.

I asked him if he wanted to get back together but he said he would never do so.

Before the visits started, he sent me a letter from his lawyer, seeking my consent to a divorce. After that I do not know what happened. My daughter hates to see her father. I have to coax her and explain to her that it's her father and he loves her, and that the problem is between me and him. I want everything to be over, and I want to get him out of our lives. I am afraid of him. What should I do now? - Dilemma

It looks like you had stepped into a very complex family situation when you married S. It is very unlikely that S and his sister had anything romantic going on between them. However, the lack of boundaries in their relationship is cause for concern. No wonder the first marriage ended after just 52 days.

It is not strange that your in-laws hated you. They were jealous because you posed a threat; they were afraid of losing S's love. This is rather ironic because there is no way that S could ever love anyone. His mother and his sister dominate his life.

So when you came into the picture, it became an obligation for him. He had a duty as a husband. And there was probably little else in your relationship with S.

With you, it was a matter of control. You were not allowed to visit your mother. Your movements were controlled and monitored. The home was their territory, and S their property. You were necessary - people have to get married. But the idea of loving anyone other than themselves is alien to this family.

You are lucky that you are out of this marriage and this family. There is no way of knowing S's motives in wanting a relationship with your daughter after all these years. You are right to be suspicious. More importantly, now is the time to be careful and vigilant.

Since he has already initiated divorce proceedings, you should follow up. Your best protection now is the law.

Check on the progress of the divorce. If S did not go through with it, you should consider initiating it. Also, it will be wise for you to seek custody of your child. Speak with a family lawyer.

If your daughter does not like her father visiting her at school, you can suggest that he meets her elsewhere. If she is adamant that she will not see him at all, you will have little choice but to involve the law in this matter.

You may want to check to make sure that the first marriage ended legally. S must be divorced before he could marry you. Otherwise, there are legal implications which affect you, your marriage to S, and your daughter.

Do not be upset that your marriage has ended. Sometimes, we have to know when the end comes. Even if it wasn't for the unusual closeness between S and his sister, the marriage was unhealthy because of the way you were treated. You were disrespected. You were even beaten. All this amounts to abuse.

At this moment, why are you afraid of S? What do you think he can do to you? What can he do to your daughter? Keep these questions in mind and try to get some perspective on the situation. Just remember, no one is infallible. S can be kept away from you and your daughter. You can be safe. He has no power over you. Your fear is the only power he has, so it is important to not be afraid.

All in all, your marriage to S was toxic. Be glad that you are out of it. S and his family can speak ill of you for all they want - and you can be sure they will do it again when you start the custody battle for your daughter. You have nothing to be ashamed of. True friends would know they have no reason to doubt you. - Thelma

Related Stories
'I played hard to get with my husband and it did wonders for my sex life'
'My wife refuses to have sex with me, I think she's cheating on me with our relative'
Woman who had affair with married man stripped and bashed up in Malaysia
Hubby left wife after she refused to let him speak to female colleague
marriage
relationships
relationship
confession
divorce