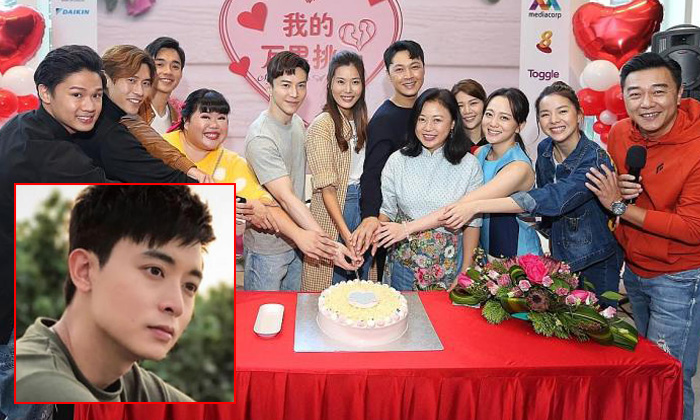 The lensing ceremony held yesterday was supposed to be a joyous occasion to mark the start of filming for a TV series, but the absence of actor Aloysius Pang, who was meant to star in it, was keenly felt.

He was originally slated to be the male lead in Channel 8's romantic drama My One In A Million after returning from reservist training in New Zealand.

But on Jan 24, the news came of his tragic death in a New Zealand hospital after he sustained severe injuries during the reservist training.

But the show must go on, and the role was recast.

Although no tears were seen at the event and the mood appeared to be far from gloomy, Pang was never far from Carrie Wong's thoughts.

After all, she had paired up with Pang several times in previous shows.

She said that he was a "good guy, good friend and outstanding actor", adding solemnly: "He would not have wanted us (the cast) to grieve for too long. To honour his work ethic, we'll all be doing our best in our roles.

"He never had the chance to complete this show, so we will all complete it for him."

My One In A Million also stars Xiang Yun, Guo Liang and Jeffrey Xu.

Wong prides herself on her professionalism, adding: "Work is work, no matter who's starring opposite me. It won't change the performance I intend to give."

Also in the spotlight was Pang's last-minute replacement, Lawrence Wong, who recently rose to fame with the mega-hit Chinese drama The Story Of Yanxi Palace.

It took him no more than two days to accept the role and he was "happy to help do this favour" for Mediacorp and the local showbiz scene.

My One In A Million marks his first Channel 8 lead role, after several supporting parts before his big break with Yanxi Palace.

Wong told reporters he did not know Pang personally but he would do his best in the role, adding he would put his own spin on it.

He said: "This is one of the few comedic characters I've got the chance to play in my career. I hope the audience will like what I do with it."

Wong is also dealing with grief, as his 94-year-old grandmother died a few days ago. What helped him make it through the lensing ceremony was knowing that she died peacefully in her sleep.

He said: "I am sad, but I am also happy she is no longer suffering."