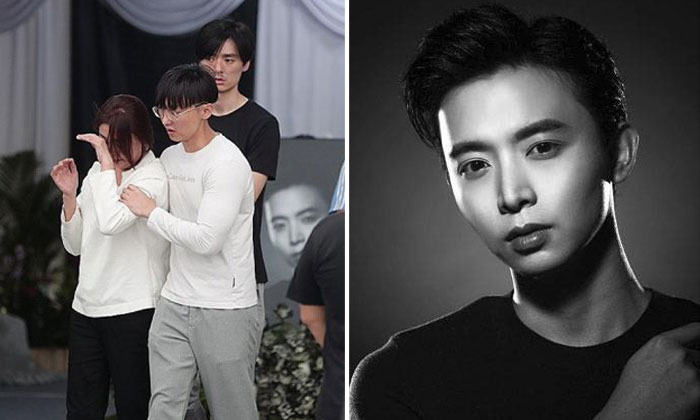 As actor Aloysius Pang lay in his hospital bed in New Zealand, suffering from injuries that would ultimately prove fatal, his thoughts were still primarily about the welfare of his mother.

His mother, the only one to see him when he was still conscious in hospital, cried upon seeing her son in that state, and Mr Pang tried his best to cheer her up.

Speaking on behalf of the family at the memorial service on Sunday (Jan 27), Mr Pang’s eldest brother Jefferson told those gathered of one of the last conversations the family had with the 28-year-old.

“When my mum was crying by his bed, his first reply he gave was: ‘Mum, don’t cry. If you cry, I’ll cry too, and I’m in a lot of pain. I’ll be better in a couple of days, and I’ll take you to New Zealand casino to walk walk’,” he said.

“So when I saw some of the pictures of what happened to him, I could imagine that he was undergoing a lot of pain. And the first priority was still mum,” he added, choking up.

Describing the period in the hospital as a very difficult time for the family, he said that Mr Pang’s “kryptonite” was his mother’s tears.

The armament technician from the 268th Battalion, Singapore Artillery was on reservist duty.

Tributes flowed during the 1hr 45min memorial service for Mr Pang at MacPherson Lane on Sunday afternoon, with a string of eulogies from colleagues, friends and relatives - including veteran actors and production crew.

In the speeches, Mr Pang was repeatedly described as a kind-hearted, filial, and hard-working man who loved his parents and was dedicated to his career.

Mr Jefferson Pang, who was the first speaker, said their mother doted on Mr Pang a lot because he was the youngest. She would coach him on his scripts when he was younger, be there on set, and "witnessed a fine young man growing to where he is today".

Founder of film distributor Encore Films, Ms Joyce Lee, who produced and directed the 2016 film Young and Fabulous featuring Mr Pang in the lead role, had a meal with him a day before he left for his reservist duty.

The most important people to him were his parents, she said. "(Mr Pang) even told me when he finds a girlfriend or wife, the most important criteria is that she has to be filial to his parents. Otherwise, he would not accept her," she said in Mandarin.

Ms Lee said Mr Pang had looked forward to going to New Zealand because "he said he had some things to think over", being 28 and having felt he had the responsibility to take care of his family. He had also told her that he wanted to be a director and get married by 31.

Mr Pang's girlfriend Jayley Woo, who went public with their relationship after his death, attended the memorial service but did not speak.

Actress Kym Ng said: "Why do I love Aloysius? He is very sensible, always very thoughtful, dedicated to his friends and his work. I will miss you Aloysius, your smile, your big eyes, and the gentleness in your voice when you talk. Farewell."

Actress Felicia Chin revealed how Mr Pang set aside 10 per cent of his pay every month to thank and bless the production crew, adding that he was also a humble person who would not boast about his achievements.

She said he would buy portable fans for his fellow actors on set. "He always loved, gave and spoke from his heart," she added.