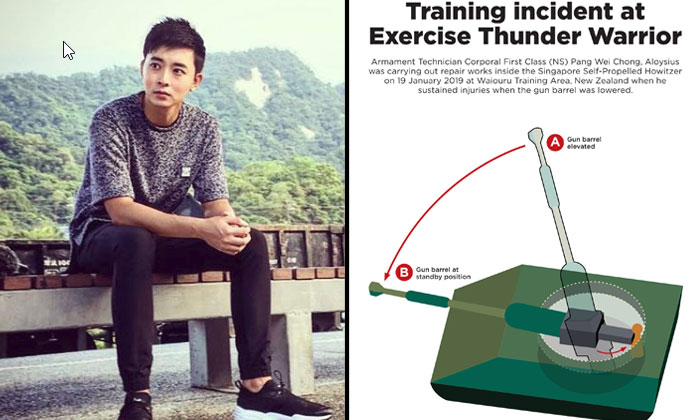 While on an overseas live firing exercise last week, Corporal First Class (NS) Aloysius Pang was part of a team that was called in to diagnose a suspected fault with the Singapore Self-Propelled Howitzer (SSPH).

Before the diagnosis could begin, the gun barrel had to be lowered to a neutral position, which left CFC (NS) Pang caught between the end of the barrel and the interior of the howitzer.

This caused the serious chest and abdominal injuries that led to the Singaporean actor's death on Wednesday (Jan 23).

On Thursday, at the Ministry of Defence in Bukit Gombak, Chief of Army Goh Si Hou gave these initial findings into the incident that happened last Saturday during the annual Exercise Thunder Warrior in New Zealand.

He said: "When the gun barrel is lowered in the SSPH, the space in the cabin is reduced. However, it is typically sufficient for artillery operators as well as our technicians to be able to operate within this cabin. 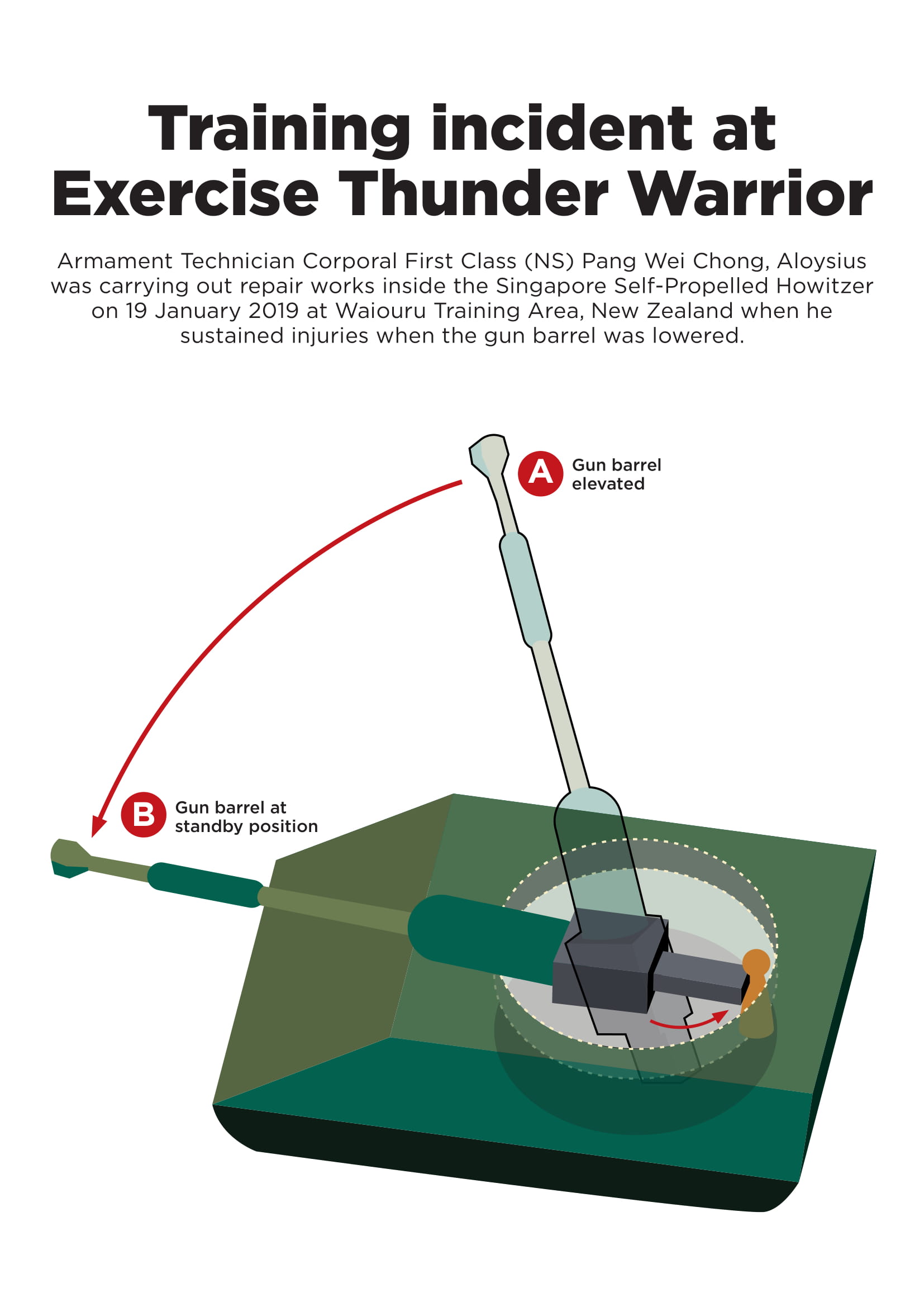 "What we found is that unfortunately, (CFC (NS) Pang) was unable to get out of the way of the barrel as it was lowered."

Two other servicemen - another technician and a gun detachment commander - that were in the howitzer's cabin with CFC (NS) Pang, 28, were uninjured, said Major-General Goh.

CFC (NS) Pang's formation chief, Colonel Terry Tan, told reporters that the lowering of the gun barrel is done within the cabin, and a "check clear" procedure needs to be followed whenever the barrel is lowered.

The barrel, which can be lowered manually or automatically with the press of a button, had to be lowered for diagnosis to be performed. In CFC (NS) Pang's incident, the lowering was automatic, he said. On average, this movement can take about nine to 10 seconds.

As part of standard operating procedure, the howitzer's operator and the technician will first discuss when such a repair needs to be done. After that, a verbal warning and visual check of the cabin is conducted before the button is pressed to lower the barrel, said Col Tan.

It is also part of protocol to lower the gun to a standby position - a neutral position for the gun barrel - in order for the technician to diagnose the fault.

When asked who has the authority to lower the gun, and if any lapses have been discovered so far, MG Goh said that this was a matter that would be part of ongoing investigations.

The army chief added that, at this point in time, they were not aware of anything that could have impeded the movement to get out of the way of the barrel.

CFC (NS) Pang, 28, was an armament technician from the 268th Battalion Singapore Artillery who was trained to perform maintenance and repair for the howitzer.

The operationally-ready national serviceman was part of the forward maintenance platoon, which is activated to diagnose a fault when an operator detects one.

"If it is beyond the competency of the forward maintenance platoon, they will ask the regular technicians, who are positioned behind to come forward to diagnose the fault," said Col Tan, who is Commander of Combat Service Support Command.

He added that CFC (NS) Pang was "qualified and competent" to do his job in the exercise, and it was not his first time maintaining the howitzer.

"In fact, this is his seventh in-camp training. He has done five high-key and low-key (trainings). Prior to Exercise Thunder Warrior he has attended maintenance vocational and refresher training. In fact, when he landed in New Zealand he was given just-in-time refresher training before training started," he said.

CFC (NS) Pang died on Wednesday at 8.45pm despite attempts to repair his damaged organs through surgery and putting him on artificial life support. He underwent three operations at Waikato Hospital, which is a regional trauma centre that handles a high volume of such cases.

The army has operated the howitzer for the last 15 years without any serious injury, said MG Goh, adding that an immediate pause on all maintenance-related work and training in both Singapore and New Zealand was called after the incident.

He added that Mindef has also convened an independent Committee of Inquiry to look into the circumstances leading to the incident, and the cause of CFC (NS) Pang's serious injury.

Chief of Defence Force Melvyn Ong said that the SAF remains committed to the safety of all its soldiers.

"I see thousands of NSFs and NSmen on a regular basis. We engage them on their training. They are training every day to ensure a safe and secure Singapore... They are proud of what they do. It is a responsibility that they don't wear lightly on their sleeve," he said.

"And we have worked hard over the last couple of months, learnt from each incident and put in place better procedures, measures, practices. But we can do better."