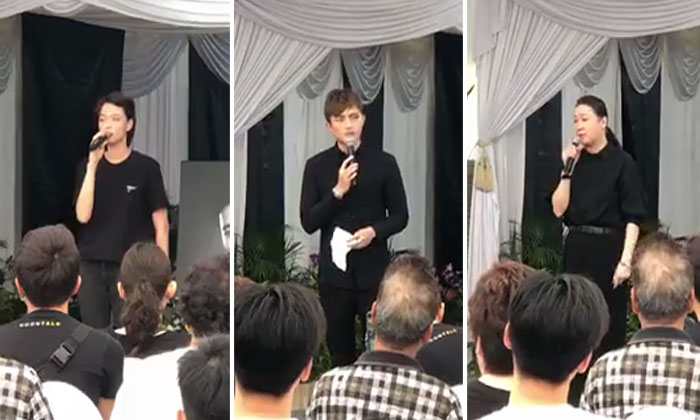 Family members and friends of Aloysius Pang were at 82A MacPherson Lane, where they delivered eulogies in a private memorial service that started at 1.30pm.

Aloysius Pang's eldest brother Jefferson Pang said their mother was crying when she visited him at the hospital.

"First thing he said was, 'mum don’t cry, otherwise I will cry too'." He consoled his mother, saying he would get well.

Said actress Kym Ng: "Why do I love Aloysius? He is very sensible, always very thoughtful, dedicated to his friends and his work. I will miss you Aloysius, your smile, your big eyes, and the gentleness in your voice when you talk. Farewell."

Veteran actress Hong Huifang spoke about how Aloysius Pang was very considerate and kind to his colleagues: "Aloysius, you are the son every parent wants."

Joyce Lee, who produced and directed the 2016 film Young & Fabulous featuring Aloysius Pang in the lead role, said the late actor told her he wanted to get married by 31.

Actress Felicia Chin revealed how Aloysius Pang set aside 10 per cent of his pay to thank and bless the production crew. She said he's also a humble person who would not boast about his achievements. "He always loved, gave and spoke from his heart."

Mediacorp producer Leong Lye Lin, who said she has worked with Aloysius the most in his career, said: “He last told me: ‘I want to act well, to take care of my parents well. I’ve let them worry too much when I’m young, it’s time for me to repay them.’”

Actor Desmond Tan compared Aloysius to the likes of Bruce Lee, Heath Ledger and James Dean: “Like them, he was a star who left us way too early."

Actor Xu Bin, who is a good friend of Aloysius Pang, said: "You were always there for me, no questions asked." He also shared how Pang would take time to donate blood and even thought of donating his bone marrow.