Merc driver charged with causing death in AYE accident: His business has been slow of late, says office neighbour 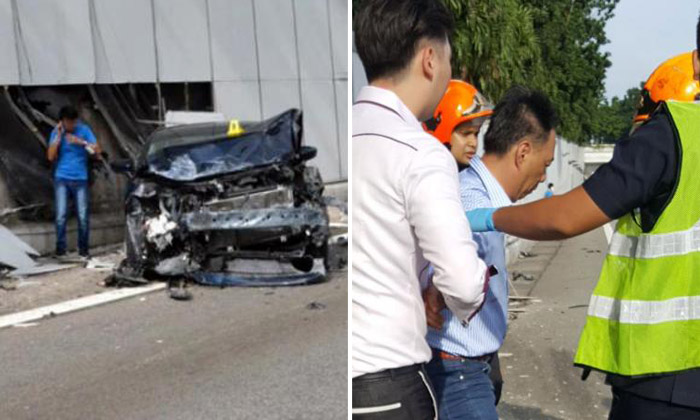 Businessman Lim Chai Heng, 53, has been charged with causing death by reckless or dangerous driving for his role in Monday morning's dramatic accident on the Ayer Rajah Expressway (AYE).

He allegedly drove a Mercedes-Benz car against the flow of traffic at high speed and rammed into a car, killing its driver, Mr Liong Kuo Hwa, 37. Four others were injured, including Lim himself.

The incident happened at 8.02am. The charge says that Lim went against the flow of traffic, thus resulting in a head-on collision with Mr Liong's Toyota Vios, which was travelling towards the Tuas Checkpoint.

Lim's car - ferrying a man who later identified himself to a witness as Lim's son - then ploughed into a motorcycle, sending its rider and pillion rider flying in the air.

The incident was captured by various in-car cameras.

A Chinese interpreter yesterday read the holding charge to Lim, who was warded in National University Hospital for injuries.

Mr Liong, also known as Jackie, had appeared in several films, television programmes and commercials. He was pronounced dead at the scene.

His 37-year-old wife, Ms Venny Oliver, who was in the car, was injured and warded in hospital, along with the motorcyclist and his female pillion rider.

From a business profile search, The Straits Times (ST) learnt that Lim has owned a printing business operating from a unit at Kallang Bahru Industrial Estate since 1993.

The business was open when ST visited the premises yesterday afternoon, and there were three employees present at the time.

One of them, who declined to be named, would only say that Lim treated his staff well.

Mr Koh Siu Liung, who runs a business next door supplying equipment to the marine industry, said that Lim was friendly, always smiling and would chat with him often.

"We would talk about our businesses and regular everyday topics," said Mr Koh. "He mentioned recently that his business has been a bit slow of late and he was not earning as much as in the past."

When the ST team visited Lim's Hougang Street 11 condominium, a male family member told a security guard that he did not want to speak to the media.

Lim will be remanded at the Institute of Mental Health for psychiatric assessment after his discharge from hospital.

The case will be mentioned in the State Courts on Jan 3.

The maximum punishment for causing death by dangerous driving is five years in jail.