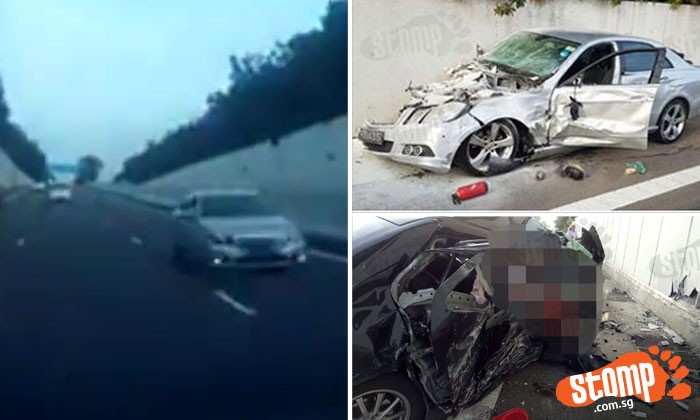 Another video has emerged showing what happened before the accident involving a Mercedes that left one person dead on the AYE yesterday (Dec 19) at around 8am.

Yesterday, Stomp reported that the Mercedes caused a trail of destruction on the expressway after its driver went against traffic at around 120km/h. Six other vehicles were wrecked during the accident and four people were left injured.

Several Stompers sent Stomp a video showing the Mercedes hitting a black Toyota. The 37-year-old Toyota driver had to be extricated with hydraulic tools and was pronounced dead at the scene.

Another video showing the Mercedes narrowly missing three cars while going against traffic flow has been making its rounds on social media.

The 35 second video uploaded by Roads.sg first shows two cars travelling on the AYE, one on the second lane and one on the third lane of the three-lane expressway.

The car on the third lane then filtered into the second lane after it entered an underpass.

Shortly after that, the Mercedes emerged against traffic on the third lane.

It zoomed past the two cars as well as the vehicle of the driver that captured the video that was also second lane.

The Mercedes driver was driving his car very close to the lane markers on the expressway, missing the three cars by mere centimetres.

A Police spokesperson has told Stomp that the 53-year-old male car driver was arrested for causing death by rash act.

A netizen who was at the scene confronted Mercedes driver and was told by his son that he was suffering from depression.

The first video shows the footage mentioned in the article. The rest of the videos show the Mercedes hitting other vehicles as well as the aftermath of the horrific accident.