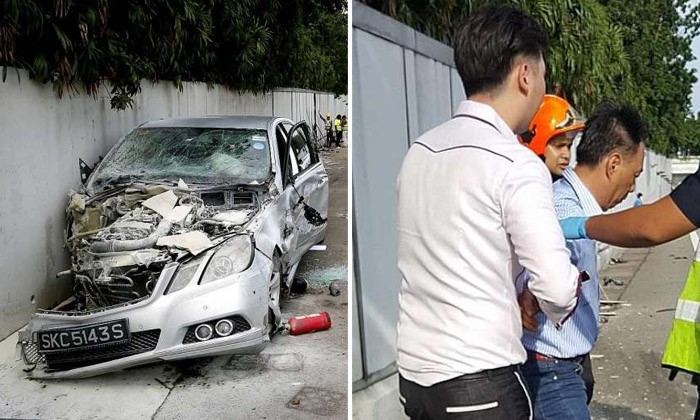 The driver of the Mercedes-Benz that left a trail of carnage yesterday was seen mumbling and talking to himself when motorists rushed to him.

At about 8am, the 53-year-old had driven against the flow of traffic on the Ayer Rajah Expressway (AYE) before slamming his car into several vehicles, killing one driver and injuring three other people in the process. The Mercedes driver himself was also taken to hospital.

Procurement officer Rozaidy Mokhtar, who had been driving along the same stretch and had barely avoided the Mercedes, said he approached the driver and his front-seat passenger after the accident.

Mr Rozaidy, 31, said the driver was "sitting down, mumbling and talking to himself". The front-seat passenger, a male adult who identified himself as the driver's son, said his father was "depressed", and he apologised.

"(The driver) didn't look shaken, just angry. When his son... tried to calm him down, he shouted at him," said Mr Rozaidy. He added that the driver's wife and daughter, who arrived at the scene around 20 minutes later, were in tears.

Mr Rozaidy said he was driving to his office in Tuas South Street 5 when he saw the silver car driving against the flow of traffic. He was in the middle lane of the AYE before the Tuas West Road exit.

He swerved to the leftmost lane of the three-lane road to avoid the car and it zoomed past in the right lane. As he slowed down and checked his right side mirror, he saw a black Mazda swerve sharply to the left to avoid the same car but it crashed into the side of a tour bus.

"But the car behind the Mazda, a Toyota Vios, couldn't avoid it and collided head-on with the Mercedes," said Mr Rozaidy, who spoke to other eyewitnesses when he went to help. The Toyota skidded across two lanes and hit a wall to the left. "The car flipped," he said.

But the Mercedes did not stop even then. Hitting the wall on the right side of the expressway, it swerved into the middle lane and rammed into a motorcycle, sending its rider and pillion rider flying. The motorcycle then crashed into another black car.

After pulling up on the road shoulder, Mr Rozaidy called the police. He then rushed back to help the victims. He found the Toyota driver, Mr Jackie Liong Kuo Hwa, 37, bloodied and trapped in his car.

Mr Liong was pronounced dead at the scene by paramedics.

His passenger, a 37-year-old woman, along with the motorcyclist and his female pillion rider, both 34, were taken to National University Hospital.

Grab driver Lim Wee Teck, 51, was driving a passenger to Tuas when he realised there was an accident up ahead. "There was a loud bang and then smoke and debris flew into the air on the road ahead," said Mr Lim, who stopped to help.

"The Mercedes engine was on fire and we were worried it might explode. As there were buses behind my car, I took fire extinguishers from them to put out the flames. It took four extinguishers before the flames were put out."

Mr Lim said the driver of the Mercedes seemed out of sorts. The driver was later arrested for causing death by a rash act.

No one on the tour bus was injured and its passengers, who were headed to Selangor, were said to have boarded another bus that arrived later.

The maximum penalty for causing death by a rash act is five years' jail and a fine.