Toyota driver who died in AYE accident: You might've seen him in TV ads 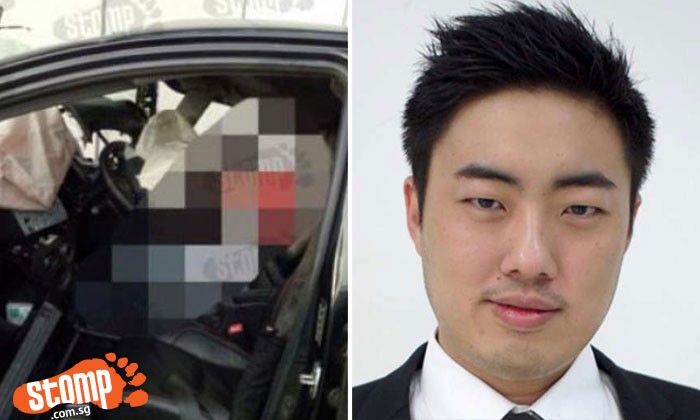 The 37-year-old man, Mr Liong Kua Hwa, who died in a six-vehicle accident on the Ayer Rajah Expressway yesterday (Dec 19) at around 8am, was an event emcee and actor who appeared in several commercials.

A Mercedez-Benz was driving against traffic flow at 120km/h and crashed into the victim, who is also known as Jackie Liong, who was driving a Toyota Vios towards Tuas.

Shocking videos of the accident were sent in by Stompers, showing the impact the car made as it plowed through the expressway.

Mr Liong's car veered across three lanes and flipped sideways and he was left trapped in the driver's seat.

His passenger, a 37-year-old woman believed to be his wife, was sent to the National University Hospital along with three others including the Mercedez-Benz's driver.

He was extricated by the Singapore Civil Defence Force and the paramedics pronounced him dead at the scene.

According to The Straits Times, his portfolio on his website shows that he has appeared in television shows such as "First Class and "Code of Law."

His body of work also includes commercials such as one of Kentucky Fried Chicken.

His neighbour, who only wanted to be known as Mr Loh, said that Mr Liong and his wife moved into his home in Jurong West around six years ago.

He mentioned that Mr Liong appeared in fast food and coffee commercials on TV and was funny in them.

Shocked at the news of the accident, he said, "While I find it difficult to speak to him (Mr Liong) due to language barriers, he was always polite and greeted us.

"I can't imagine how hard the news will hit the couple's parents."

Director of Shooting Gallery Asia, Mr Yee Chang Kang, knew Mr Liong for many years through their projects said, "Jackie has always been a wonderful guy to work with...

"A great actor. Always giving his best on set. I have never seen him grumble on our shoots ever."

There are also testimonials on his website praising him for his passion, enthusiasm and positive attitude."

The 53-year-old driver of the Mercedez-Benz has been arrested for causing death by a rash act.