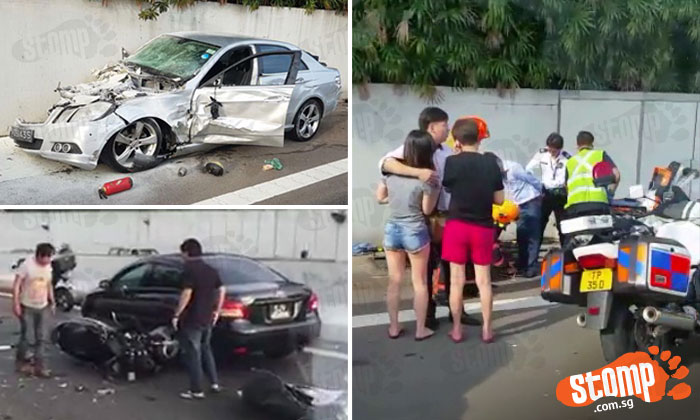 Submitted by Stomper Dean and Zack

Stompers Dean and Zack sent Stomp videos showing an accident on the AYE at around 8am today (Dec 19) that left one dead and four others injured.

According to an eye-witness, the accident that left a trail of destruction on the expressway was caused by a driver of a Mercedes who allegedly drove 120km against the flow of traffic.

One of the drivers involved in the massive accident was trapped in a car and had to be extricated by SCDF personnel. He was pronounced dead by paramedics.

In the videos the Stompers sent, a severely damaged silver-coloured car can be seen next to a wall of the AYE. The car's bonnet was completely smashed.

Just behind the car, there was a group of people

A few metres down, there was a fallen motorcycle beside a stationary car surrounded by debris. A woman was lying in front of the motorcycle. She looked to be conscious was accompanied by a man.

The video then shows a flipped car on the road shoulder. Debris was strewn all over the vehicle as other motorists rushed to check on what had happened.

Further down, SCDF personnel can be seen attending to a black-coloured car that was also involved in the accident.

A fourth car also had its bonnet severely damaged following the carnage on the expressway. Walls behind the vehicle were also destroyed.

Said an SCDF spokesperson with regard to the dramatic accident:

"SCDF were alerted to an accident on the AYE towards Tuas before Tuas West Road at about 8.05am.

"A male Chinese was found trapped in the driver's seat of a car and he was extricated by SCDF using hydralic rescue tools.

"He was pronounced dead by paramedics.

"Three persons were conveyed to NUH and the hospital was alerted to be on standby to receive them."