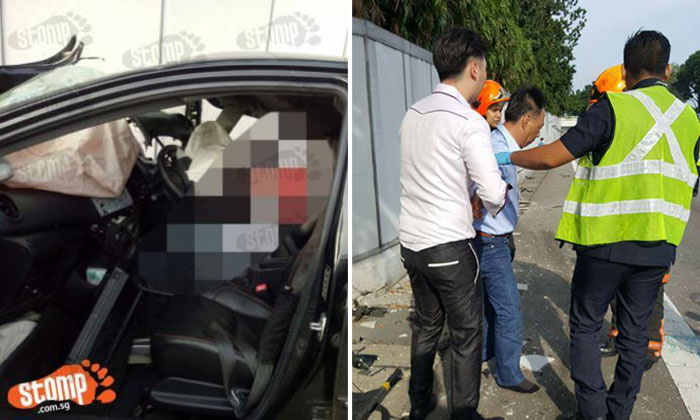 A 53-year-old man was arrested in relation to the horrific crash on the AYE at around 8am this morning (Dec 19) that left one driver dead.

Stomp earlier reported that the accident was caused by a Mercedes driver who was allegedly travelling against the flow of traffic at around 120km/h.

Six other vehicles were wrecked during the accident and parts of the walls on the AYE were also damaged.

Several Stompers also sent Stomp a video showing the moment when the Mercedes suddenly emerged against traffic and crashed head-on into a Toyota. The Toyota driver was later pronounced dead at the scene.

Netizen Teo Bay Pio posted a photo on Facebook showing a man clad in blue shirt and jeans who is believed to be the driver of the Mercedes.

He was accompanied by a man dressed in white who the netizen said is the driver's son.

Another netizen Nurul Zaidy who was at the scene confronted the duo and was told by the Mercedes driver's son that his father was suffering from depression.

"On 19 December 2016 at 8.02am, Police were alerted to an accident involving four cars, one motorcycle and one bus along AYE towards Tuas.

"Four people aged between 34 and 53 were conveyed to NUH.

"A 37-year-old male car driver was pronounced dead by paramedics at the scene.

"A 53-year-old male car driver was arrested for causing death by rash act.