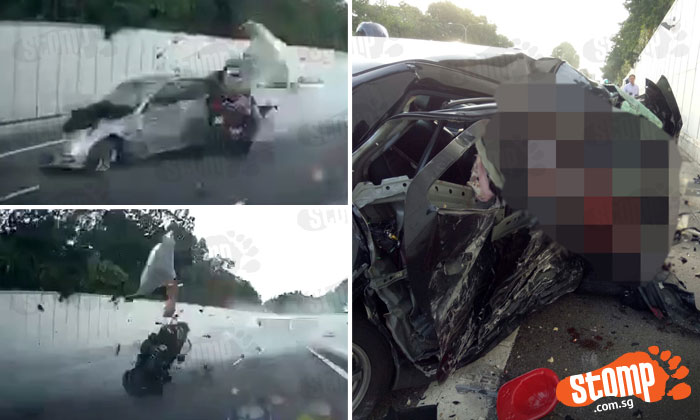 Several Stompers sent Stomp a shocking video showing the accident at 8am this morning (Dec 19) on the AYE that left one man dead and four others injured.

In an earlier Stomp article, it was reported that the accident was caused by a Mercedes driver who was allegedly travelling against the flow of traffic at around 120km/h.

The accident caused a trail of carnage. At least four other vehicles were wrecked. The expressway was strewn with debris and parts of the walls of the AYE were also destroyed.

In the video the Stompers sent, a motorcycle can be first seen travelling on the expressway.

As the motorcyclist was approaching an underpass, the Mercedes suddenly emerged against the flow of traffic before crashing head-on into a blackToyota on the right lane of the road.

The impact caused the Toyota to be flung across the road into the wall of the expressway. The driver had to be extricated with hydraulic tools and was pronounced dead at the scene by paramedics.

Stomp received photos showing the Toyota driver laying motionless in his vehicle after getting hit by the Mercedes.

Based on the photos, the airbags of the Toyota were deployed, but they could not save the life of the driver.

The collision with the Toyota did not break the momentum of the Mercedes and it then rammed into a motorcycle on the left lane of the expressway.

Both the motorcyclist and the pillion were flung forward onto the road following the impact, but were conscious.

See the shocking video in below.