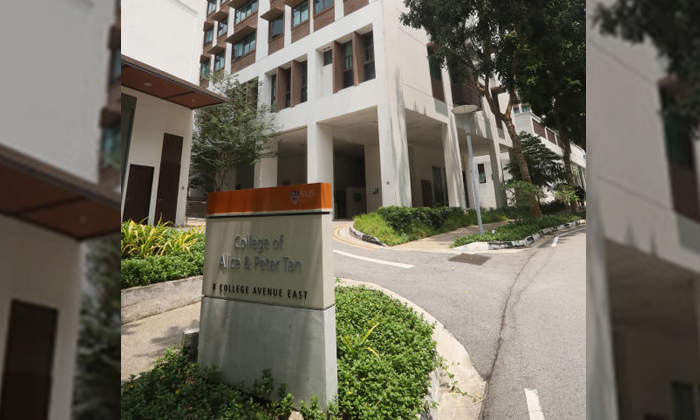 A 24-year-old National University of Singapore (NUS) student was arrested on Saturday morning for entering a women's toilet in an NUS residential college, allegedly to install a hidden camera.

Police said in a statement last night that they also found two spy cameras in two women's toilets in the same college following his arrest, and is now investigating the case as one of criminal trespass and suspected voyeurism.

An NUS spokesman told The Straits Times yesterday the student has been suspended with immediate effect and has been barred from entering all campus premises.

Police said that they received a call from NUS campus security at about 6am on Saturday, after security staff found and detained the male student in the women's toilet of the College of Alice and Peter Tan, which has residential facilities for students.

The suspect does not live in the residential college, but is believed to have stayed there overnight against house rules as a guest of one of the college's residents.

Since the incident, the university has been conducting a sweep of women's toilets on the NUS campus. No other suspicious devices have been uncovered, the university's spokesman said.

The two devices that were removed "look like smoke detectors but were actually spy cams mounted in the two female toilets of level 12", according to a message from NUS to college residents, which was seen by ST yesterday.

Police also said the hidden camera the student was allegedly trying to install had been "disguised as a smoke detector".

College staff are contacting students affected by the incident to offer support and assistance, and have reminded residents not to let guests stay overnight, the NUS spokesman said.

She added that the university takes "a very serious view" of the matter.

"Disciplinary action will be taken against any student found to have breached the university's rules and regulations. We also urge the NUS community to remain vigilant, and to immediately report any suspicious person or activity to campus security."

The Saturday incident is the latest case of sexual misconduct at the university. Last year, NUS was embroiled in a high-profile case in which undergraduate Monica Baey was filmed showering at a university hostel by another student.

This prompted a national debate about how sexual misconduct cases were dealt with in universities here, after Ms Baey expressed her frustration over the perceived light punishment meted out to the perpetrator.

Following this, NUS accepted recommendations, including tougher penalties such as a minimum one-year suspension for serious offences like the voyeuristic taking of photographs or videos in toilets.