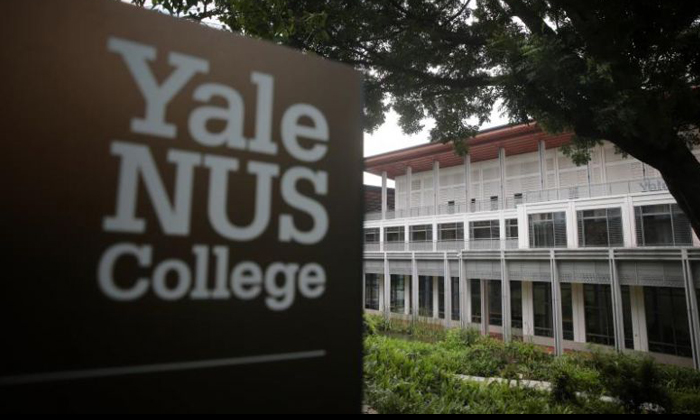 A Yale-NUS College student, who shared a suite residence on campus with five female schoolmates, shot nude videos of four of them while they were showering in their common bathroom on separate occasions.

The 26-year-old man, who cannot be named due to a gag order to protect the women's identities, pleaded guilty in court on Monday (Jan 13) to eight counts of insulting a woman's modesty. Another 16 similar charges will be considered during sentencing.

He committed the offences between August 2017 and March last year. They involved at least four different women as some of the victims were unidentified.

Professor Joanne Roberts, executive vice-president of academic affairs at Yale-NUS College, said the student was dismissed "for breaching the College’s code of conduct and posing a safety risk to our community. The dismissal took effect from end October 2019".

Deputy Public Prosecutor Gabriel Lim said that the man and his victims stayed in individual bedrooms at the suite. The four women were 22 years old at the time.

One of them returned to the suite at around 8pm on March 3 last year with her boyfriend and entered the bathroom to take a shower.

About five minutes later, the offender made his way to the closed bathroom door, placed his mobile phone above it and used the device to record her in the nude.

The woman heard noises outside and spotted his feet when she peered under the gap of the bathroom door.

She looked up and shouted for her boyfriend when she spotted the mobile phone. She then wrapped herself in a towel and ran out of the bathroom.

The offender immediately sprinted to the living room, sat on a sofa and deleted the four-second video he had shot of her. He also got rid of other incriminating videos.

The victim and her boyfriend then asked the man if he had seen anybody entering the suite. The boyfriend also asked to view the offender's mobile phone but could not find find any incriminating videos by then.

To deflect suspicion from himself, the man lied to the couple and claimed that their fifth housemate, a woman whom he had never filmed, had entered the suite.

He also suggested that a party guest of a nearby gathering could be the perpetrator as the door to their suite was unlocked.

The woman reported the matter to campus security but was told there were no relevant closed-circuit television cameras at places such as inside the suite and the nearby staircases.

The offender finally came clean at around 11.30pm that day after the woman told him that she wanted to lodge a police report.

In a meeting with his housemates, he confessed that he was the one who had stood outside the bathroom earlier that evening.

He, however, continued with his lies by claiming that it was the first time he had done so. The victim initially believed the man and decided not to alert the police.

The woman and the offender attended the same church, the court heard.

She finally lodged a police report 10 days later after a meeting between both sets of parents.

A raid was conducted later that day and officers seized items such as the man's mobile phone and hard drive. The incriminating videos were then retrieved following a forensic examination.

DPP Lim said: "According to the accused, he recorded videos of his suite mates showering as it helped him to de-stress from his academic pressure... He also re-watches the said videos on his handphone whenever he felt overwhelmed with schoolwork."

The man, who is represented by lawyers Josephus Tan and Cory Wong from Invictus Law Corporation, was offered bail of $15,000 on Monday.

In an earlier statement, Yale-NUS College said the man was immediately suspended the day after it was notified about the incident in March last year.

She added that the college takes a serious view of allegations of sexual misconduct and has in place a process to address such matters, as well as support systems to ensure the psychological well-being of students.

The man will be sentenced on Jan 31. Offenders convicted of insulting a woman's modesty can be jailed for up to a year and fined for each charge.

Related Stories
NUS student allegedly flashed woman and masturbated in front of her in university's science library
NUS student’s molest victim: 'I had no idea he wrote an apology letter'
NUS student allegedly filmed girl in hall bathroom, changed his attire to avoid being identified
NUS responds after female undergraduate demands firm action to be taken against student who took video of her in the shower
More About:
pervert
Peeping Tom
NUS
court