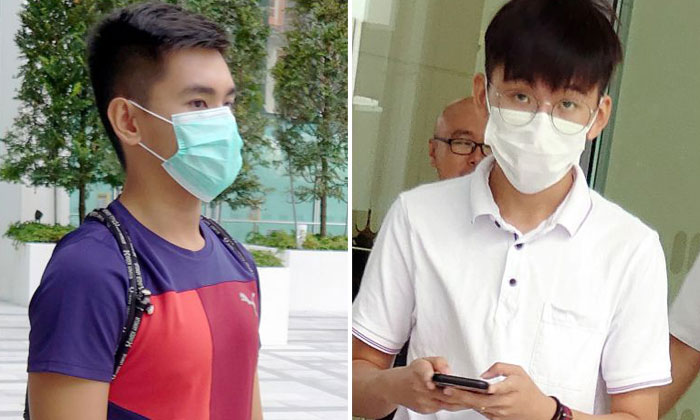 In separate incidents, three male students targeted women in different tertiary institutions and preyed on their victims in toilets.

Two of them, Nanyang Technological University (NTU) student Pham Nguyen Tuan Anh and Zachary Lim Yong Hao, who was then studying in a junior college, also insulted the modesty of their victims.

The third offender, Republic Polytechnic (RP) student Tee Ze Qian, followed his schoolmate into a toilet and attempted to insult her modesty.

All three pleaded guilty to their offences on Thursday (Feb 27). The victims in the cases cannot be named due to gag orders to protect their identities.

Anh, 23, has been sentenced to eight weeks' jail and a fine of $2,000. The Vietnamese admitted to one count each of insulting a woman's modesty and being in possession of obscene films.

One of his female schoolmates entered a men's toilet on campus at around 10.15pm on April 17 last year to take a shower and Anh followed her inside.

It was not stated why she did not use the women's toilet.

As she was showering, he entered an adjacent cubicle and used his mobile phone to record her in the nude.

The woman knocked against a wall partition when she spotted the device and Anh fled the scene before deleting the video.

An NTU spokesman said on Thursday: "The university takes a very serious view of any criminal conduct. Any student who is found guilty will be subject to disciplinary action, which may include suspension or expulsion from the university. The university is unable to comment on specific cases due to confidentiality."

In an unrelated case, the court heard that Lim was a junior college student when he committed his offences.

Court documents did not reveal details about his school, and he is now waiting to serve his national service.

On Thursday, the 18-year-old Singaporean pleaded guilty to one count each of criminal trespass and insulting a woman's modesty.

Deputy Public Prosecutor Colin Ng told District Judge May Mesenas that Lim was travelling on a bus around January last year when he alighted at the National University of Singapore (NUS) as he wanted to use a toilet.

He later spotted a female student and felt an urge to follow her when she went into a toilet .

After this incident, he fell into the habit of visiting NUS almost every Sunday to look at female students there.

On March 17 that year, he went to a women's toilet at around 3.40pm and occupied one of the cubicles there.

A 22-year-old woman entered an adjacent cubicle about an hour later, the court heard.

She looked up and was shocked to see Lim's face peering down at her.

She immediately left the toilet and returned at around 5.40pm with security officers.

However, Lim had left the toilet by then. The woman lodged a police report five days later.

Lim returned to NUS on May 5 last year and again entered a women's toilet.

Two security officers caught him red-handed while he was inside and the police were notified.

Lim initially denied any wrongdoing, and insisted that he had entered the toilet by mistake.

He eventually admitted that he had deliberately followed a woman inside as he would get an "adrenaline rush" whenever he entered a women's toilet.

Judge Mesenas has called for a report to assess Lim's suitability for a probation.

In the third case, Tee, 18, pleaded guilty to one count each of criminal trespass and attempting to insult a woman's modesty.

The Singaporean entered a women's toilet at RP's swimming complex on April 30 last year to try and watch a schoolmate in a shower cubicle.

When the woman left the cubicle to retrieve something, she spotted him standing outside.

He told her that he had entered the toilet by mistake and left.

The polytechnic's discipline master alerted the police on May 2 last year.

In an earlier statement, RP told The Straits Times that Tee has been suspended since that month.

District Judge Kan Shuk Weng has also called for a report to assess Tee's suitability for a probation.

Tee and Lim were each offered bail of $5,000 on Thursday.

Tee will be sentenced on March 23, while Lim's sentencing will take place three days later.

Offenders convicted of insulting a woman's modesty can be jailed for up to a year and fined for each charge.