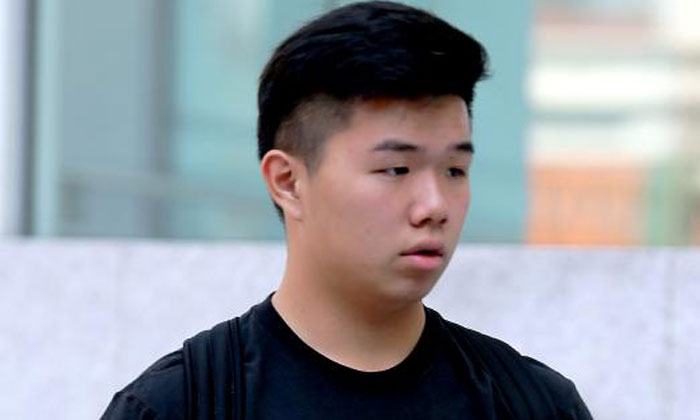 Chiang Wei Sheng, 19, must remain indoors from 10pm to 6am every day and his mother was bonded for $5,000 to ensure his good behaviour.

He has to perform 150 hours of community service and is prohibited from owning a mobile phone with camera functions during his period of probation.

In handing down the sentence, District Judge Seah Chi-Ling told the teenager that he should "value the chances" given to him.

In a statement on Friday, NYP told The Straits Times that following its internal disciplinary proceedings earlier this year, Chiang has been suspended for two semesters - or one academic year - with immediate effect.

Its spokesman added: "NYP takes a serious view of sexual misconduct, and expects all our students to maintain and uphold the highest standards of conduct at all times."

Three other similar charges were taken into consideration during sentencing.

Chiang was at Jurong East MRT station at around 5pm on March 21 last year when he spotted a woman going up a flight of stairs.

He stood behind the woman and used his mobile phone to snap several upskirt photos of her.

The teenager struck again six days later at the Singapore Expo when he took similar pictures of another woman as she was going up an escalator.

He was finally caught on April 9 last year after taking multiple upskirt pictures of a 28-year-old woman as she was going up an escalator at Sembawang MRT station.

Deputy Public Prosecutor Kenneth Chin had said: "When the victim felt something brush against her right inner thigh, she turned around and saw the accused behind her with his mobile phone underneath her dress.

"The victim confronted the accused who eventually admitted that he had taken photos under her skirt."

An MRT station master alerted the police and officers arrived soon after to arrest Chiang.

They seized his mobile phone and a forensic analysis of the device revealed that he had upskirt photos of five other unknown women.

The DPP added that Chiang had stored the images in an encrypted application on his mobile phone.

For each count of insulting a woman's modesty, he could have been jailed for up to a year and fined.