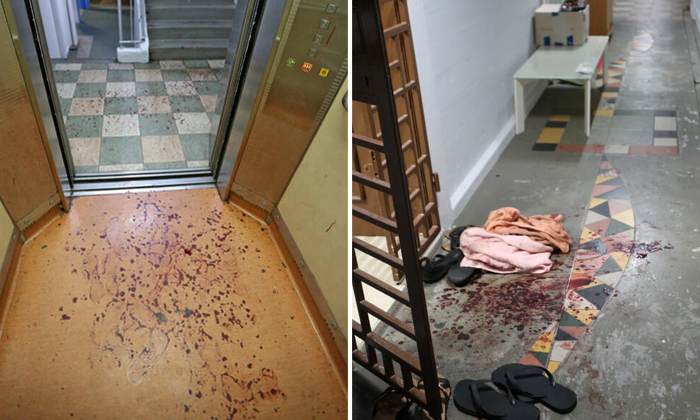 Update: 3 arrested for attack on youth who was ambushed while going to meet GF's ex-lover

After telling his family that he was going out to buy drinks, a man went to meet his girlfriend's former boyfriend to resolve their differences.

The meeting on Wednesday evening landed the 20-year-old in hospital with serious injuries after he was attacked by a group of men.

His older brother, 24, told Shin Min Daily News that his family later found out he had agreed to meet his girlfriend's ex-lover at a void deck.

To his horror, the victim, who was not named, realised the meeting was an ambush when four to five men set upon him, the brother said.

The family was shocked to see the victim bleeding profusely from multiple slash wounds when he returned 15 minutes after stepping out.

The father told Lianhe Wanbao his son was slashed on the forehead and suffered a deep cut on his left arm that exposed the wrist bone, for which surgery was required.

The police told The New Paper yesterday they were alerted to a case of voluntarily causing hurt by dangerous weapon at Block 106 Lorong 1 Toa Payoh at about 6pm on Wednesday.

A 20-year-old man was taken conscious to Tan Tock Seng Hospital, they added.

The police also said that preliminary investigations indicate the victim knew one of his assailants.

TNP understands the suspects are still at large. Investigations are ongoing.

This incident is the latest in a spate of violent attacks, including a murder, during the circuit breaker period.

Shin Min reported yesterday that at least eight police vehicles were at the scene. Two dogs from the police's K-9 unit were also present.

Lianhe Wanbao reported that the attack left a 20- to 30-metre trail of blood along the void deck at Block 106 and at the staircase on the second storey.

The father, who declined to be named, told the Chinese evening daily: "My son was knocking on the door, anxiously asking me to open it.

"Initially, he did not want to tell me how he got hurt. He told me what had happened only after I continued to ask him about it."

The father said he suspected his son's love rival of the attack. He also claimed the ex-lover had just been released from prison.

The brother told Shin Min the victim has previously squabbled with his rival over his girlfriend.

Residents in the area said a group of four to five people were shouting along the covered walkway.

Some said the victim lived on the eighth storey.

A 41-year-old resident, who wanted to be known only as Mr Hamid, told Wanbao: "I heard (the victim) had escaped to the lift lobby on the second storey before falling to the floor from exhaustion. Neighbours then called the police."

Mr Hamid, who said he is a distant relative of the victim, added that he had seen four or five youths loitering at the void deck at about 3pm that day.

Recent attacks include the alleged stabbing of a National Parks Board officer by a 61-year-old man at the Sungei Serangoon Park Connector on May 4.

The man has been charged with attempted murder.

On May 10, Mr Tay Rui Hao, 38, died from his injuries at Sengkang General Hospital after he was stabbed near Punggol Field while jogging at night. A 20-year-old man has been charged with the murder.

Earlier that day, Mr Douglas Wong Wei Hao, 30, was attacked at a cemetery in Choa Chu Kang. Two men have been charged over the incident.

The police also responded to a case of rioting with dangerous weapons in Upper Cross Street at 3.30am that day. Several people have been charged.

At about 7pm, they attended a case of voluntarily causing grievous hurt by dangerous weapon in Jurong West. A 21-year-old man has been charged.