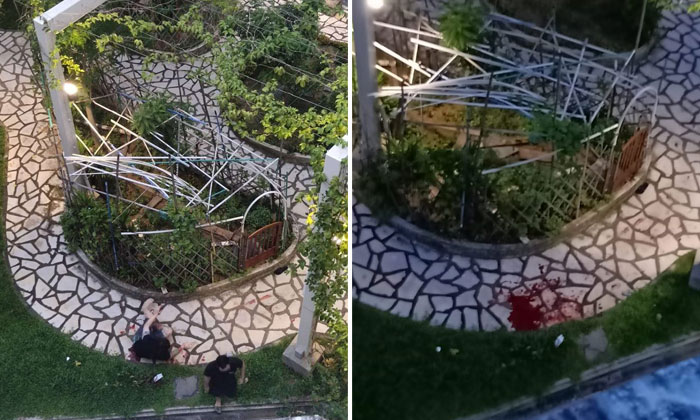 A 21-year-old man has been arrested for attacking another man with a dangerous weapon at Block 452 Jurong West Street 42 on Sunday evening (May 10).

It is unclear what weapon was used in the assault.

Photos of a man sitting in a pool of blood have been circulating on WhatsApp.

According to Singapore Uncensored, a resident heard shouting in the area before seeing a man covered in blood on the ground after looking out of his window.

Another man was seen leaving the area but it unclear if he was involved in the incident.

The Singapore Civil Defence Force (SCDF) told Stomp it received a call for assistance at about 7.05pm and that a man was conveyed to National University Hospital (NUH) in an SCDF ambulance.

In response to a Stomp query the police said they were alerted to a case of voluntarily causing grievous hurt by dangerous weapon at 7pm.

"The victim, a 26-year-old man, was conveyed conscious to NUH," a police spokesman said.

"A 21-year-old man, who is known to the victim, has been arrested in relation to the case."

This is the fourth reported attack that happened on Mother's Day (May 10).

In the early hours of that morning, a group of youths were involved in a riot involving parangs at a condominium at Chinatown. A 19-year-old man was taken to hospital and three others were arrested. A police manhunt for the others involved in the incident is ongoing.

Two men were arrested after allegedly attacking a man with a metal baton and knuckleduster at Choa Chu Kang Cemetery at about 3am. The 30-year-old victim was left with multiple injuries, including a deformed left arm, puncture wounds on both legs and wounds on his head.

A 38-year-old man died after he was found injured with multiple stab wounds in a suspected murder along Punggol Field on Sunday night.