Fatal AYE accident: Netizen says Mercedes is 'good killing machine' and that driver had right to go against traffic 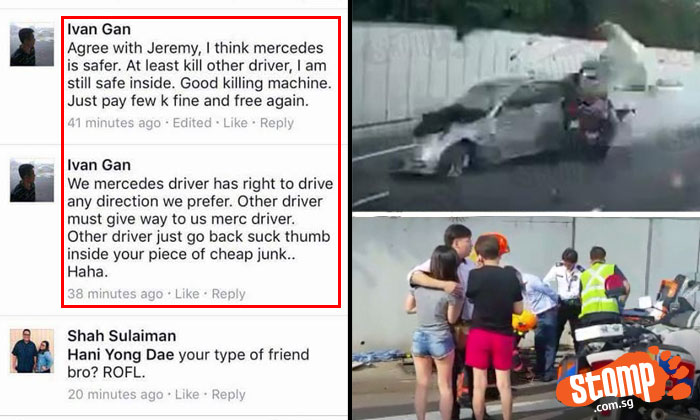 Stomper Cheong sent Stomp a photo showing a netizen who made insensitive remarks in reference to the horrific crash on the AYE yesterday (Dec 19) at around 8am that left one driver dead and four others injured.

Yesterday, Stomp reported that a Mercedes caused a trail of destruction on the expressway after its driver went against traffic at around 120km/h.

Several Stompers sent Stomp a shocking video showing the Mercedes crashing head-on into a Toyota. The 37-year-old Toyota driver was pronounced dead at the scene.

Netizen Teo Bay Pio posted a photo on Facebook showing a man clad in blue shirt and jeans believed to be the driver of the Mercedes. He did not appear to be seriously injured although his car was wrecked.

Another netizen user by the name of Ivan Gan has made comments online insinuating that Mercedes vehicles are 'good killing machines' and that Mercedes drivers have the right to drive in any direction they prefer.

"I think Mercedes is safer. At least kill other driver, I am safe inside. Good killing machine. Just pay few K fine and free again."

"We Mercedes driver has right to drive in any direction we prefer. Other driver must give way to us Merc driver.

"Other driver just go back suck thumb inside your piece of junk. Haha."

Said Stomper Cheong with regard to the netizen's comments:

"The netizen is very insensitive. People are dead and injured and yet he can say something like that.

"Authorities should do something about it to let people like him understand what the law means."

A 53-year-old male car driver was arrested for causing death by rash act in relation to the horrific accident and Police investigations are ongoing.