I remember the car coming towards me, but I couldn't do anything: Woman who was flung from bike in fatal AYE accident 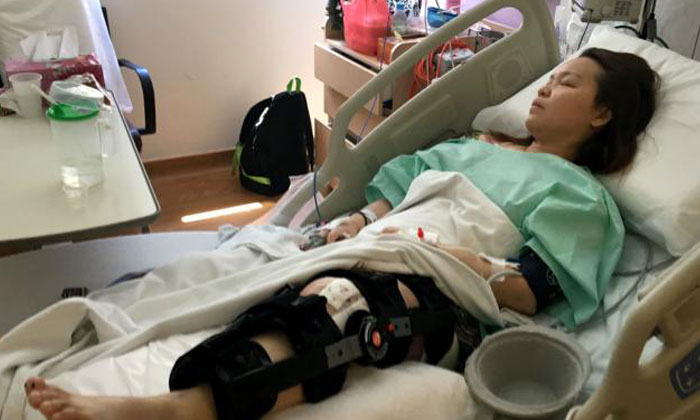 She was riding pillion on her husband's motorcycle when she saw a car speeding against the flow of traffic towards them.

Before her husband could react, the Mercedes-Benz hit their bike, sending them hurtling through the air.

As Madam Janice Choo, 34, lay injured on the Ayer Rajah Expressway (AYE), her first concern was for the safety of her husband, Mr Teh Tze Yong.

Then, racked by pain in her left leg, her next worry was whether she would walk again.

The Malaysian couple, who live here, were among five people injured in the accident just before the underpass leading to the Tuas Checkpoint on Monday morning.

A Toyota driver was killed on the spot while his wife was injured. The Mercedes driver and a Mazda driver were also hurt.

Read also:  Injured wife may not be able to say final farewell

Businessman Lim Chai Heng, 53, was charged with causing death by reckless or dangerous driving at his bed in the National University Hospital (NUH) on Tuesday.

A video clip of the Mercedes hitting the motorbike has gone viral online.

When she saw the clip, Madam Choo could not believe the woman in the video was her.

She told The New Paper yesterday from her NUH hospital bed: "I cried a lot, but it was very hard to register that the video clip was of me.

"It made me realise how lucky I am." The administration officer said her husband was taking her to work at Tuas when the accident happened at about 8am.

"I remember seeing the car coming towards me. I was shocked but I could not do anything," she said.

"I remember thinking to myself, the car is definitely going to hit me."

The impact sent her flying and when she landed, her first thought was of her husband. She said: "I wanted to find him to make sure he was all right. I was relieved when I saw him alive. I told him my leg hurt a lot. I did not know if I could walk again." Madam Choo has since undergone a five-hour operation on her fractured left leg.Her brother-in-law, Mr Teh Tze Wei, 29, said his brother has had two operations for fractures on both hands and injuries on three fingers.

The quality control inspector said he was unsure if Mr Teh will need to go under the knife again.

The couple, who registered their marriage in 2005 and held their wedding ceremony in 2011, are both warded at NUH but they have not been able to see each other due to their injuries.

Madam Choo is now worried how the injuries will affect their future.

Mr Teh had just started working as a driver at Yang Kee Logistics about a month ago.

"We will not be able to work for at least three months.

"I'm worried how we are going to pay the monthly rent for our home," she said.

The couple pay $650 a month to share a three-room flat in the Pioneer area with three relatives.

A Yang Kee Logistics spokesman told TNP it had been in contact with Mr Teh's family and will work closely with them "to render support through this difficult period".

Her parents, Mr Choo See Chan, 58, and Madam Choy Moy Chai, 62, drove eight hours from their home in Perak, Malaysia, to visit her and her husband at NUH.

Madam Choy said: "We never thought something like this would happen. We were worrying throughout the drive here."

The accident has made Madam Choo swear off motorcycles.

She said: "I feel too afraid to ride a motorcycle ever again."