Reunited: Nippon Paint ex-colleagues catch up for first time in 52 years thanks to Stomp report 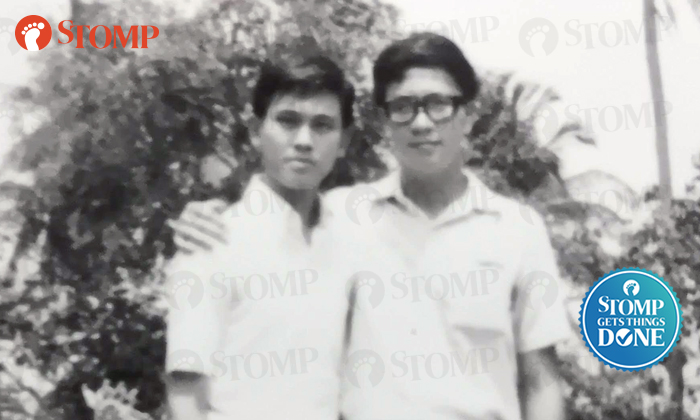 Two men, who are now in their 70s, have finally reconnected after being out of touch for 52 years following an appeal on Stomp.

Stomper Jessica earlier shared how her 73-year-old father, Mr Chen Ninghan, was looking for Mr Hong Risheng, a Singaporean who lived in Clementi.

Mr Chen met Mr Hong when he came from Malaysia to Singapore for work at the age of 19. The two men worked at a Nippon Paint factory in Queenstown from 1969 to 1970, but lost touch in 1977.

Jessica's appeal was circulated among employees at Nippon Paint in a group chat. They recognised Mr Hong and identified him as Mr Ang Jit Sing.

A staff member, Ms Shelly Chan, contacted Stomp and said: "The older colleagues who left Nippon Paint still mingle and keep in contact with one another. Those who left Singapore have lost touch but we still have some older colleagues around so we know."

Jessica got in touch with Mr Ang on Tuesday (July 19) with Stomp's help.

She recounted: "I spoke to Mr Ang and he shared how he knew through old mutual friends at Nippon Paint that my dad was looking for him.

"Mr Ang was very thrilled as well when I told the story of my dad looking for him. In fact, he shared with me that he had actually been thinking about my dad too in the last few days before this happened.

"I gave my dad his contact details and they did a video call to catch up for the first time in 52 years.

"My dad was really thankful to Stomp and said it was the happiest day ever.

"We will arrange for the Nippon Paint old colleagues to meet up when my dad comes to Singapore again.

"I hereby want to thank Stomp again for helping us to share the article. I am truly grateful for your help."

Jessica promised to provide more updates when the two men meet in person and shared a screenshot of her father expressing his joy at the good news.

"Thank you, this is dad's happiest day!"

Stomp also got in touch with Mr Ang, who is now 75 and retired.

Asked how he felt about the reunion, Mr Ang said: "Being able to reconnect with my old friend, of course I am very happy! The joy in my heart is indescribable, haha!

"I have fond memories of the days when we worked together, ate together, went shopping together and had fun together. It was a happy time of us helping and taking care of each other."

A screenshot provided by Jessica, in which Mr Ang addresses her dad by his nickname 'Ah Chin' and says: 'I am Ang Jit Sing, we were colleagues at Nippoin Paint in 1970. I am very happy for this chance to get in touch with you! I don't know how to express what I'm feeling right now!"

This is the second time in a month Stomp has successfully reunited old friends. Two men who worked at Jurong Shipyard in the 1960s recently found each other again and have made plans to meet when they are both in Singapore later this year.

Stomper Ivan said his 75-year-old father-in-law was over the moon to reconnect with his long-lost friend, adding: "This would not have been possible without the Stomp article!"

In 2017, Stomp reunited long-lost family members of a World War II Scottish army officer and his Singaporean Malay wife. They had been out of touch for more than 40 years, but found one another less than a day after an appeal was posted on Stomp.