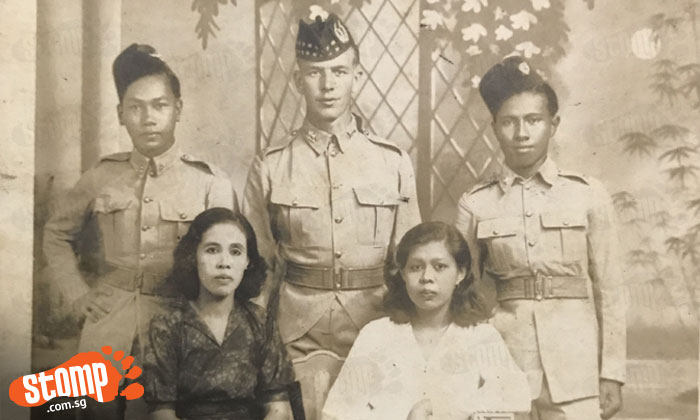 Stomper Syahied is hoping to find his long lost relatives whom his family lost contact with some time in the 1960s to 70s.

His great-grandfather was William Angus, a Scottish officer with the British Army who married his great-grandmother known as Halijah or Bibi, who came from a Malay family, in the 1940s during World War II.

William embraced the name Osman after converting to Islam and had two children with Halijah, a son named Wahab Bin Osman and a daughter named Madia Binte Osman, Syahied's grandmother.

However, William passed away when Madia was just one year old, the circumstances of which are unknown but Syahied believes it was during the Japanese Occupation.

The family lived together at the British Quarters in Cairnhill with William's sister, Margaret who worked in the High Court as a Malay and English interpreter.

Madia's family lost contact with Wahab's family after the two siblings started having families of their own.

"I heard there was an argument before Madia moved out," said Syahied.

Wahab and his family moved out shortly after that, leaving their mother Halijah to live at their childhood home with Margaret.

Madia had an only son name Zainol, Syahied's father, who vaguely remembers playing with his cousins growing up.

Syahied's family has been searching for their relatives for the past 40 years but has had little success as the older generations cannot remember their relatives' proper names and have no record of what happened to them.

Syahied's grandmother Madia is in her 80s and Syahied hopes that she can see her family once more before she departs this world.

"I believe Stomp is a very powerful source which can link people up fast," said Syahied.

"We've tried looking around and about for them but they are nowhere to be found."

If you are one of Syahied's missing relatives or have any information on what happened to them or where they are, please contact Stomp at stomp@stomp.com.sg or WhatsApp 9384 3761.

Related Stories
Japanese businessman reunites with Singapore girl whom he had a 40-year crush on
Son searches for biological father who worked in Singapore in the 1990s
Are you The One? Smitten driver looking for cute girl in sports attire at AMK
missing
looking for
family
reunion
world war 2