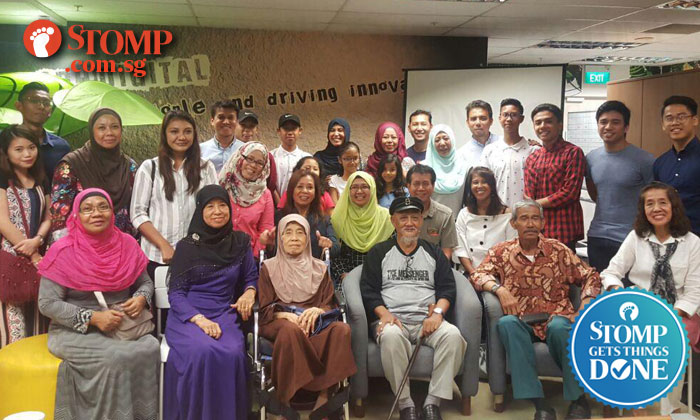 Zainol bin Atan, 64, and his family, were nervous as they waited in a conference room at SPH News Centre last Saturday evening on April 8. They were going to be reunited with long-lost family members they had lost contact with for over 40 years.

Zainol's mother, Madia Bte Osman, and her older brother, Wahab, were the children of a Scottish officer serving in the British Army during WWII named William Angus.

William had married a Singaporean Malay woman named Halijah, also known as Bibi, and took on the name Osman after converting to Islam.

Madia and Wahab's families initially grew up together at the British Quarters in Cairnhill, but soon parted ways for reasons unknown.

Zainol's son, Muhammad Syahied, 23, had written in to Stomp last Thursday (April 6), hoping to reconnect with his father's side of the family after years of trying without success.

"I believe Stomp is a very powerful source to link people up fast," said Syahied.

Stomp published an article looking for Wahab bin Osman and his family on Thursday evening.

The next morning at around 9am, a woman named Faridah messaged the Stomp Team on WhatsApp, saying that Wahab bin Osman was her father.

One of her nieces had seen the article on Stomp and alerted the rest of the family via their WhatsApp group chat.

Faridah said that she remembered her cousin Zainol from growing up together and said she used to call him 'Abang Nol'.

She called the Stomp Team from her home in Kuala Lumpur, crying with happiness at the prospect of reuniting with the lost family members on her father's side.

When Stomp gave Syahied the happy news that the family he was looking for had contacted Stomp, he was shocked to find out that his father had 11 cousins.

"I knew that my dad had a few cousins but I wasn't expecting this many!" he exclaimed.

Both sides of the family were keen to meet, so Stomp organised a reunion for the two sides on Saturday (April 8).

Despite events happening so quickly, Faridah flew in to Singapore on Friday night just for the reunion.

Most of her siblings still reside in Singapore.

Zainol, Syahied and four other members of their family arrived at the SPH News Centre first.

Madia, who is now 93, was unable to make the trip due to her poor health.

Zainol was emotional just minutes before the reunion:

"I'm the only one on my mother's side left and I'm so happy to be reunited with my uncle's family for the sake of my children and grandchildren."

Wahab's side of the family arrived soon after with more than 20 members including Wahab's widow, eight of his 11 children, and some of his grandchildren and great-grandchildren.

When Zainol and his family walked in to meet his relatives for the first time in over 40 years, he simply asked "Do you remember me?" in Malay.

The families took each other in, with some expressing recognition and others still trying to figure things out.

Zainol walked around greeting his relatives, exchanging smiles, hugs and kisses with happy tears in his eyes.

Although awkward at first, the two families soon relaxed and started mingling and getting to know each other better.

Both sides had brought old photographs to share with each other and the families settled down to share stories and catch up on the time they had lost.

The family also bonded over food that had been prepared specially for the reunion as laughter and chatter filled the air.

After two hours of catching up and exchanging contact information, they decided to call it a wrap.

"I think we should go now because if it were up to them (the older generation), we would be here all night," joked one younger relative.

"I want to thank Stomp for helping us to reunite and thank everybody for coming. I hope in the future we can have more family gatherings and just keep in contact."

Faridah replied on behalf of her family: "We would like to thank you too...for looking for us."