Parents on trial for son’s murder: Mother says she was abused as a child and also by her husband 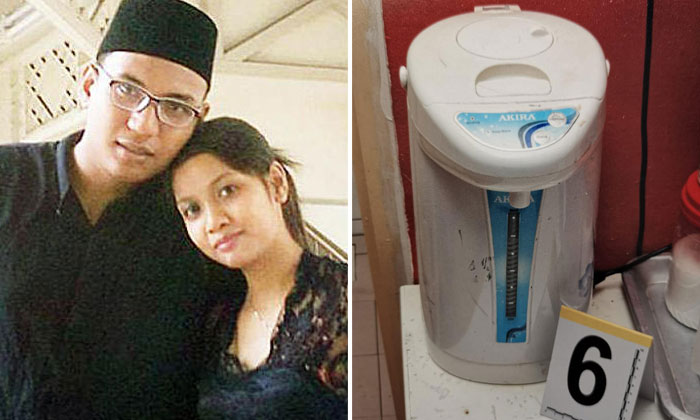 The woman who allegedly scalded her five-year-old son to death had allegedly been abused as a child and also by her husband, the court heard yesterday.

Azlin Arujunah, and her husband, Ridzuan Mega Abdul Rahman, both 27, are on trial for allegedly scalding their son to death.

He died in October 2016 after collapsing from having hot water poured on him by Ridzuan.

Yesterday, investigating officer Mahathir Mohamad, an Assistant Superintendent at the special investigation section of the Criminal Investigation Department, read out the statements he had taken from Azlin.

In a statement taken on Nov 8, 2016, Azlin had said: "Like I said, there was no one to guide me. My whole life is filled with violence.

"I myself was a victim of hot water splashing by my parents. My husband also assaulted me so I kept it all inside me.

LOST HER OTHER KIDS

Azlin also said she regretted what she had done to the victim and asked to be given a chance to make amends, as she had "lost (her) other children" due to the incident.

On Tuesday, Azlin's defence lawyer Thangavelu, who goes by only one name, said she had lived with her grandmother, and when her grandmother died, the loss was unbearable to her.

She then tried to repair her relationship with her mother, but her mother died shortly after her grandmother's death.

The court heard that Azlin had lodged a police report against Ridzuan in 2010 for punching her in the stomach and in the head.

Police also received calls of domestic dispute in 2015 and 2016 from Ridzuan's uncle and an unknown caller.

There were no medical records of the alleged assault.

ASP Mahathir also said that Azlin had told him if she spoke the truth, her husband would be taken away from her.

But she later revealed that Ridzuan had splashed hot water on the victim a day before his death.

After Ridzuan was arrested, he told police that Azlin had also splashed hot water on the boy.

Related Stories
Man in murder trial burned son's palm with heated spoon to punish him for "thieving hands"
Couple charged with son's murder: Scalded 5-year-old had dirty wounds with "a lot of black debris"
Woman accused of murdering 5-year-old son: 'How can I kill a child? Look at my small body'
5-year-old was "running for his life" when parents splashed hot water on him: Forensic pathologist
Couple charged with murder: 5-year-old pinched with pliers, kept in cat cage, had burns on 70% of body
More About:
abuse
child abuse
child
death
dead
court
couple
murder