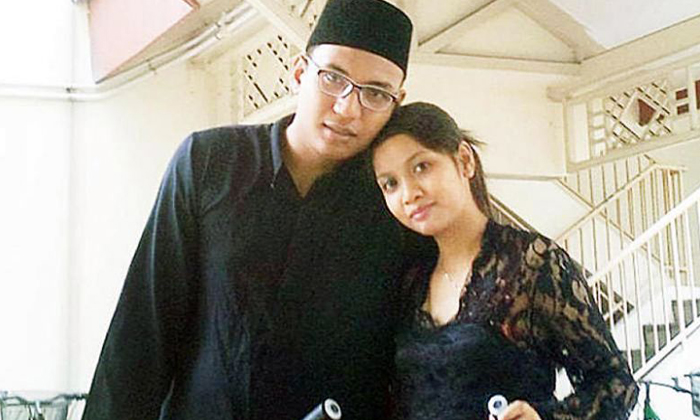 A 27-year-old man, now on trial for abusing and murdering his five-year-old son, used a heated spoon to burn the boy's palm to punish his "thieving hands" for opening tins of milk powder meant for his siblings, the High Court heard on Monday (Nov 18).

Ridzuan Mega Abdul Rahman also told forensic psychiatrist Cheow Enquan that he often beat his wife over minor disagreements but tried to refrain from hitting her and redirected his anger towards his son instead.

Dr Cheow said Ridzuan's ability to control his aggression and the fact that his violence served a purpose showed that he did not have a mental condition known as intermittent explosive disorder (IED).

The Institute of Mental Health (IMH) forensic psychiatrist was taking the stand on the fifth day of the trial of Ridzuan and his wife Azlin Arujunah, also 27, for the murder of their son by scalding him to death.

In the week leading to the boy's death on Oct 23, 2016, the couple had splashed cups of hot water on the boy.

Each of them also face charges relating to other abusive acts, including confining the boy in a pet cage, pinching him with a pair of pliers and hitting him with a broom.

Ridzuan's lawyers have submitted a report stating that he was suffering from three psychiatric disorders including IED, which involves sudden, aggressive outbursts that serve no purpose and are out of proportion to the situation.

He said that there were reasons for Ridzuan's acts of violence - he hit his wife because she tried to stop him from going out and kicked the family's pet cat for urinating on the sofa.

Dr Cheow noted that Ridzuan started off hitting the victim with bare hands, and when the boy did not stop misbehaving, he moved on to harsher punishment.

If Ridzuan had IED, he would have been indiscriminately violent towards his other children as well, said Dr Cheow.

"He had some level of control over his aggression. He was able to refrain from punishing the other children as much because they were not as badly behaved as the deceased," he said.

Dr Cheow also disagreed with the opinion of defence psychiatrist Ken Ung that Ridzuan had attention deficit hyperactivity disorder and hypnotic use disorder.

Dr Cheow's initial opinion was that Ridzuan showed antisocial personality traits but they were not enough to amount to a formal diagnosis.

He revised his opinion after Mr Thuraisingam rattled off a list of Ridzuan's bad conduct. This included quitting school at Primary 5 and drinking, sniffing glue, being sent to the Singapore Boys' Home, joining gangs and beating others up - all before he turned 15.

However, Dr Cheow said antisocial personality disorder was not an abnormality of mind that impaired Ridzuan's mental responsibility for his actions, and did not contribute to his offences.

"It doesn't impair his impulse control, doesn't affect his judgment. It's just having a certain personality construct that predisposes him to behave in certain ways," said Dr Cheow.

The IMH psychiatrist who examined Azlin is expected to take the stand when the trial continues on Tuesday.

Related Stories
Couple charged with son's murder: Scalded 5-year-old had dirty wounds with "a lot of black debris"
Woman accused of murdering 5-year-old son: 'How can I kill a child? Look at my small body'
5-year-old was "running for his life" when parents splashed hot water on him: Forensic pathologist
Couple charged with murder: 5-year-old pinched with pliers, kept in cat cage, had burns on 70% of body
More About:
abuse
child abuse
child
death
dead
court
couple
murder