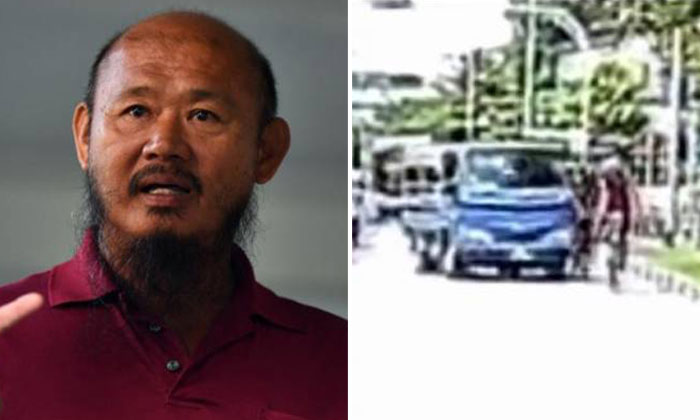 Lorry driver Teo Seng Tiong was attempting to overtake two cyclists last year when he heard a crashing sound, which made him think that he had hit a taxi on his right.

This had caused Teo, 58, to react by swerving to his left, in the direction of British national Eric Cheung Hoyu, 35, who then fell off his bicycle, said Teo's lawyer Chia Boon Teck.

However, there was no contact between the lorry and the bicycle during the incident in Pasir Ris, said Mr Chia on Monday (Sept 23), on the first day of trial for Teo.

The incident, which was captured on video and went viral online, took place at the junction of Pasir Ris Drive 3 and Pasir Ris Rise just before noon on Dec 22 last year.

In the video, which garnered more than three million views, Mr Cheung is seen hitting the left side mirror of Teo's lorry.

The lorry then suddenly swerved to the left in the direction of Mr Cheung, who fell off his bicycle and onto the grass verge on the side of the road.

Both Mr Cheung and Teo were subsequently arrested within three days of the incident.

Earlier this year, Mr Cheung pleaded guilty to two charges, for committing mischief and causing obstruction by riding his bicycle in the middle of the lane instead of the leftmost side. He was fined $2,800 on April 12.

Teo is contesting his two charges - one for acting rashly as to cause hurt to Mr Cheung, and another for failing to make a police report within 24 hours of the accident.

Among the witnesses called to the stand on Monday was taxi driver Ong Joo Kin, who was driving on the right of Teo's lorry during the time of the incident.

Mr Ong said that he did honk at the lorry, which was trying to cut into his lane.

Meanwhile, the second cyclist in the incident, Mr Nigel Harper, told the court that after Mr Cheung fell off his bicycle, Teo parked his lorry on the side of the road.

As he was approaching Mr Cheung, Teo appeared "upset and quite angry that his side mirror had been broken", said Mr Harper.

"That was the primary conversation," he added.

When asked by Deputy Public Prosecutor Gabriel Choong on how he would compare his reaction to Mr Cheung with Teo's reaction, Mr Harper said: "My response was to check if (Mr Cheung) was okay. The driver didn't appear to be concerned about (Mr Cheung), he was just pointing repeatedly at his wing mirror."

He also said Teo later drove off in his lorry before the ambulance arrived about 20 minutes later.