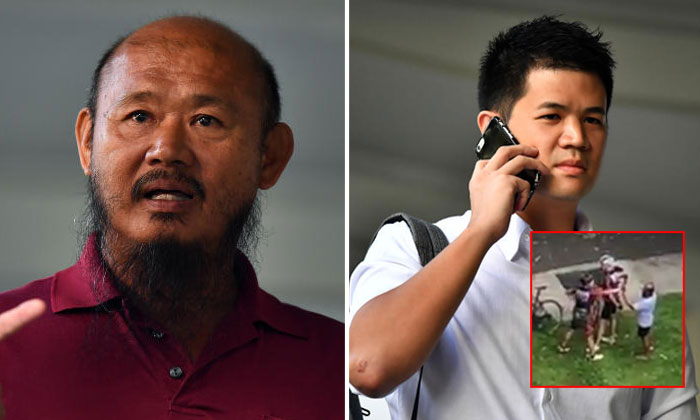 A lorry driver and cyclist who were allegedly involved in an altercation in Pasir Ris that went viral were charged in court on Wednesday (Jan 16).

He is accused of causing hurt to cyclist Eric Cheung Hoyu, 35, by negligently failing to keep a proper lookout while overtaking him, reports The Straits Times.

Court documents stated that Teo's actions caused him to come into the path of a taxi on his right, causing him to swerve left and collide into Cheung.

The maximum punishment is a jail term of six months and a $2,500 fine.

He also faces a second charge of failing to make a police report within 24 hours of the accident, which occurred at about 11.55am on Dec 22 last year along Pasir Ris Drive 3.

The offence carries a fine of up to $1,000 or up to three months' jail for a first offender.

Cheung, who is a British citizen, also faces two charges.

He is accused of committing mischief by knocking off the side mirror of the lorry Teo was driving with his hand and causing damage of $15.

The maximum punishment is a year's jail and fine.

He is also charged with breaching traffic rules by riding his bike in the middle of the left-most lane, instead of keeping to the far left edge of the road, thereby causing obstruction to faster moving vehicles.

Teo and Cheung did not have any interactions in court.

Stomp reported on the two viral videos that showed the altercation between both parties on and off the road.

In the first, the cyclist was caught on camera knocking off the side mirror of the lorry before being sideswiped and knocked off his bicycle.

In the second, the two are seen facing off before the cyclist is seen snatching the driver's phone away.

Many netizens rallied behind Teo who later shared his side of the story while Cheung became the target of an online mob lynching.

One man even challenged Cheung to a cycling match.

According to ST, the case will be mentioned again on Jan 30.