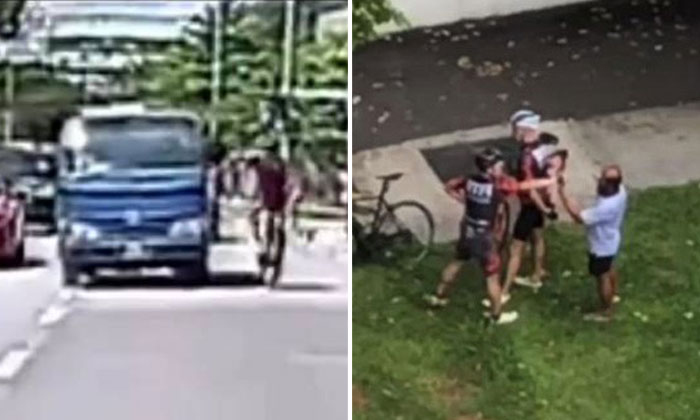 The cyclist and lorry driver who were involved in an altercation at Pasir Ris Drive 3 on Saturday (Dec 22) have been arrested in relation to the case.

Stomp earlier published a report on a video of the incident that was posted on ROADS.sg's Facebook page and subsequently went viral. It has since garnered over 2.4 million views.

In the video, the cyclist is seen riding in the middle of the lane in front of the lorry driver.

After allegedly being horned at, he raises his right hand to hit the lorry's left side mirror.

The lorry then veers to the left and knocks the cyclist onto a pavement.

He sustained abrasions and bruises but refused to be taken to hospital.

A second video of the incident was posted on ROADS.sg on Monday (Dec 24), showing what happened after the sequence of events seen in the first video.

The lorry driver is seen using his mobile phone to record the cyclist who is gesturing angrily at him.

The cyclist then snatches the driver's phone away.

Lianhe Wanbao spoke to the lorry driver who said that he had been attempting to overtake the cyclists when he knocked into one of them.

He claimed that he heard a sound which was probably when the cyclist had struck the side of his lorry.

Thinking he might have hit a taxi on his right, he swerved to the left.

He said he was not aware videos had been taken of the incident or that they had gone viral.

After the incident, he paid $15 to get a new side mirror installed and only told his wife about it.

Motorists caught for dangerous driving or riding may be fined up to $5,000 or jailed for up to 12 months or both.

Those who commit mischief may be fined or jailed for up to 12 months, or both.

The police said in its statement:  "Rash driving or riding is dangerous and could result in serious or fatal traffic accidents.

"All motorists are urged to drive safely and strictly abide to traffic rules and regulations.

"The Traffic Police will not hesitate to take firm action against motorists who choose to endanger the safety of other road users."