Cyclist hits lorry’s side mirror after getting honked at, then gets sideswiped in Pasir Ris 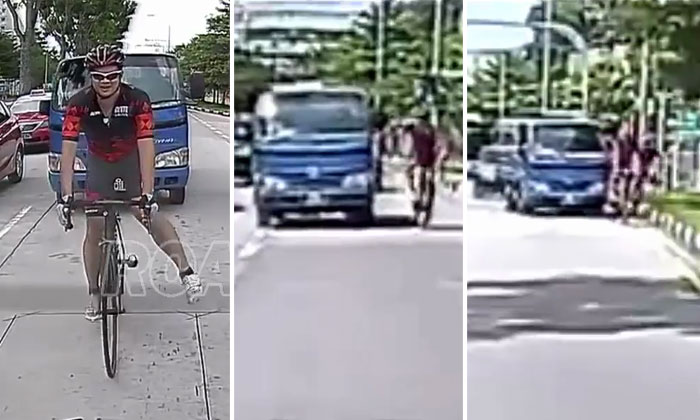 A cyclist was caught on video breaking the side mirror of a lorry after its driver had allegedly honked at him while he was riding along Pasir Ris Drive 3 on Saturday (Dec 22).

The video of the incident was posted on ROADS.sg's Facebook page.

In the video, the cyclist is seen riding with a companion two abreast and keeping to the side in the leftmost lane.

The cyclist then veers to the middle of the lane, in front of a blue lorry.

According to the post, the lorry driver sounded his horn twice with "two short honks" but the video has no audio.

Apparently agitated about being horned at, the cyclist is seen raising his arm while cycling to knock off the lorry's side mirror.

The lorry driver then hits the cyclist with the side of his vehicle, causing him to roll onto a pavement.

He is seen quickly getting back onto his feet before the video ends.

Stomp understands that an ambulance was called to the scene but the cyclist refused to be taken to hospital.

He suffered some redness on his arms.

The original poster, Y Lim, wrote in his post: "Do you think the cyclist is right? How can one just smash the mirror and get rowdy just because he think he SHOULDNT GET HONKED. Is keeping to the side of the roads so hard?"

Although both the cyclist and the driver could have handled the situation better, many netizens have taken the side of the lorry driver.

Facebook user Justin Choo said just because cyclists can ride two abreast does not mean they should.

According to the Land Transport Authority (LTA), cycling two abreast is allowed. However, cyclists are advised to ride as close as practicable to the left-hand edge of roads so as to allow traffic to overtake them safely.

Others suggested that the lorry driver may have panicked when the cyclist broke his mirror, causing him to veer to the left and knock the cyclist over.