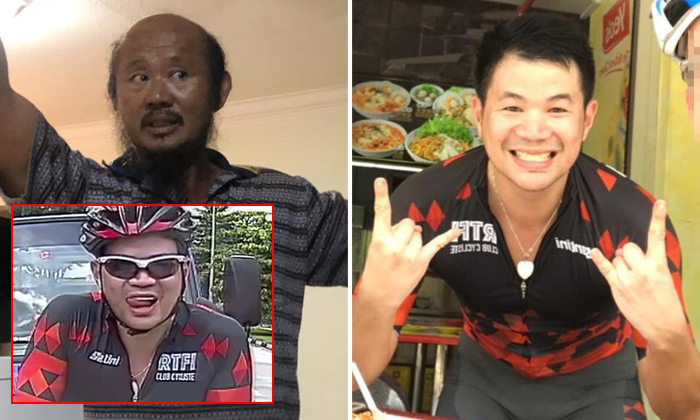 The lorry driver involved in a dispute with a cyclist along Pasir Ris Drive 3 on Saturday (Dec 22) has spoken out with his side of the story.

Two videos posted online show the altercation between both parties on and off the road, each garnering over 2.7 million views and 630,000 views respectively.

After the videos went viral, Lianhe Wanbao reached out to both parties. The cyclist did not respond, but the lorry driver accepted Wanbao's interview and recounted the incident.

Mr Zhang Shengzhong, who runs a fish farm, said he had visited the Seu Teck Sean Tong temple in Toa Payoh that morning to pay respects to his ancestors, as it happened to be the Winter Solstice Festival that day. He then headed towards Changi.

"Along Pasir Ris Drive 3, the two cyclists were riding in line with each other. One of them was riding in the middle of the road so I honked at him once, asking him to give way," Mr Zhang told Wanbao.

"However, he did not respond and only turned back to look at me when stopping at a traffic light."

After the traffic light turned green, the cyclist continued riding ahead and showed no intention of giving way.

Mr Zhang then honked once more and only then did the cyclist move aside slightly.

As such, Mr Zhang slowly filtered into the lane on his right. in hopes of overtaking traffic.

At this point, a taxi on the lorry's right side suddenly honked and Mr Zhang heard a 'bang'.

Thinking he had hit the taxi, Mr Zhang turned his steering wheel to the left on reflex.

He subsequently stopped his lorry by the roadside and alighted from his vehicle.

However, the taxi continued driving off, leading Mr Zhang to realise that it was actually the cyclist that he had collided into.

Mr Zhang also saw his lorry's left mirror lying on the ground and believed that it had been hit off, thus resulting in the 'bang' that he had heard.

He added: "When the cyclist saw me, he was very angry and, in fluent English, said that his bicycle was damaged. I did not really understand as my English is not very good."

According to Mr Zhang, both the cyclist and bicycle looked fine to him.

Worried that the cyclist might shirk responsibility over the incident, Mr Zhang took out his handphone to film a video as evidence, not expecting the other party to snatch his device away.

Initially thinking that altercation would escalate, the cyclist displayed a sudden change of attitude and gently placed the handphone in Mr Zhang's shirt pocket instead.

The cyclist also tapped Mr Zhang's shoulder in a friendly manner and asked him not to film.

Mr Zhang then took out his Identification Card (IC) and offered to exchange details with the cyclist, but the latter said he did not have his IC with him.

As the cyclist did not ask for compensation, Mr Zhang got onto his lorry and left the scene. He later had a new side mirror installed for $15.

Mr Zhang only realised that the incident had gone viral upon reaching home in the evening, when a neighbour exclaimed in jest: "You are famous!"