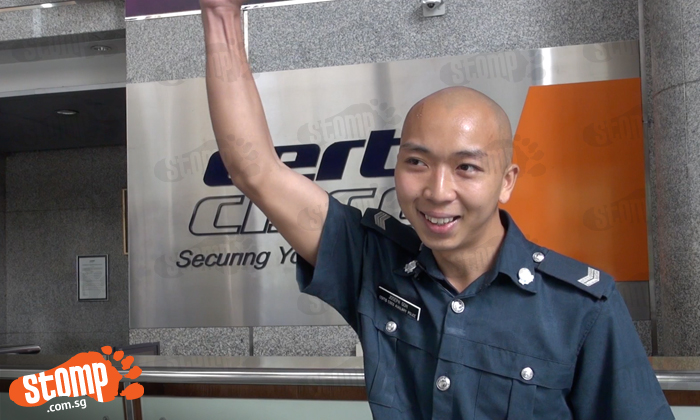 Friends have been calling him 'One-Punch Man' because of his bold and bald look, and also because he just saved the day like the Japanese superhero.

The heroic act was witnessed by many patrons at the food court, including Stomper Angela, who was buying dinner with her fellow church members.

Stomper Angela then submitted the story to Stomp.

So the Stomp Team decided to do an interview with the 23-year-old who saved the day, to get to know him better.

The officer, soft-spoken and down-to-earth, was on his dinner break after being on patrol duty in the area that Sunday evening.

He heard the sound of someone coughing badly. He saw a man, who looked to be in his 50s or 60s, choking on his food.

He rushed forward and performed the Heimlich Manoeuvre for the first time in his life.

Guided by a colleague who was also at the scene, he successfully made the fish ball pop out from the man's mouth.

"At first he was sitting down, and he was still choking," Joseph recounted the incident, "I got him to stand up and then I did the Heimlich."

How does he feel about being famous on Stomp?

"Like a hero," he smiled. He felt that it was all so surreal to have his name known by many overnight.

"Friends and family have all been messaging me, congratulating me and saying how proud they are of me," beamed the shy officer.

"I'm inspired by Joseph Schooling, firstly because I'm Joseph," he says. "I am also inspired by 'One-Punch Man' because he is the most powerful character in the world."

Related Stories
'Don't be scared to help': Wise words from teens who did CPR for cardiac arrest victims
Girl who used hijab to shield grandmother from rain speaks out about sudden fame: I now know how animals on exhibition feel
Ngee Ann Poly student gave up 'first love' and worked as dishwasher to support family at age 15
Kudos to these S'pore 'punks' for helping the needy
12-year-old receives SCDF award for helping accident victims in Yishun: He wants to know if injured pregnant woman is all right
More About:
Joseph Schooling
get inspired
inspiring
rescue