12-year-old receives SCDF award for helping accident victims in Yishun: He wants to know if injured pregnant woman is all right 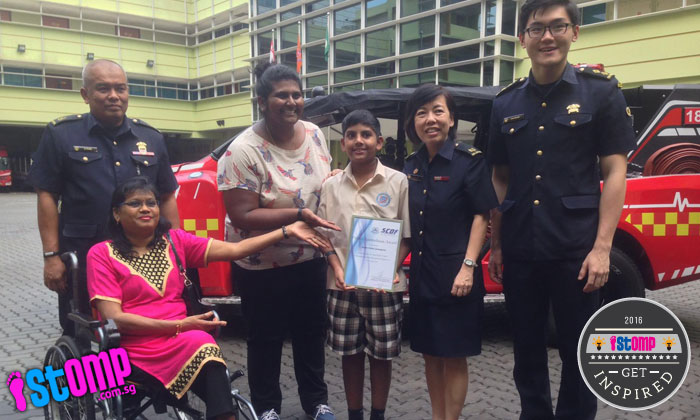 After the huge online buzz from his sister's post, Ashvin Gunasegaran shared his first-person perspective of the accident and his newfound fame in an interview with Stomp.

If you haven't already seen the viral post which Stomper Suresh alerted us to, 12-year-old Ashvin became an overnight celebrity after he rushed to help injured victims, including a pregnant woman, who were caught in a two-car accident on May 31.

Today (June 2), Stomp was able to meet and interview the young hero (and Stomp reader!) in person at the 3rd SCDF Division& Headquarters, where he was awarded the Public Spiritedness award for his initiative to help those in need.

Like many of our readers, Stomp was also curious about what prompted the boy to run into such a dangerous situation, especially when no one else seemed to be helping.

"[My friends] said it was too dangerous since there were cars and oncoming traffic, so they asked me to just stay," he explained.

But unlike his friends, who were too hesitant to do anything, Ashvin still felt he had to help.

"No one was helping them, and then no one was screaming for help. So I was scared that this accident might be fatal. So I actually went there to see whether they were okay or not."

When asked why he stayed until the ambulance arrived, he said: "[The lady] was crying and told me she was in pain, so I wanted to see that she was okay all the way."

Little did he know that his bravery would result in him becoming famous.

"I was very shocked [when they contacted us]. I actually thought at first it would just be a normal day after. But then suddenly everyone -- people, all my friends, my family -- are all calling me a hero."

His mother, Swares Helen Louisa, 50, says he's never done anything like this before.

"He does help me around the house, but doing like that -- helping someone, I think, is very amazing.

"When he came back home, he told me, 'Mommy today I saved someone's life.'

"He's only 12... Even though he's small and cannot do much, it makes such a big difference", she stated proudly.

Like Stomper Suresh, Ashvin also shared how it's sad how people nowadays are reluctant to step up and help others.

"I feel angry and disappointed. They could see that someone met with an accident, and no one was helping. When you see someone in need, you should never feel shy. Just go there and help.

"You never know. When you need them, they will come and help you", he asserted.

His kindness extended beyond the accident itself, as he eagerly tried to get in touch with the victims later to double check on their condition.

Apparently, he was able to get in touch with the black car's driver. He is still trying to reach out to the pregnant lady who was driving the white car.