'Don't be scared to help': Wise words from teens who did CPR for cardiac arrest victims 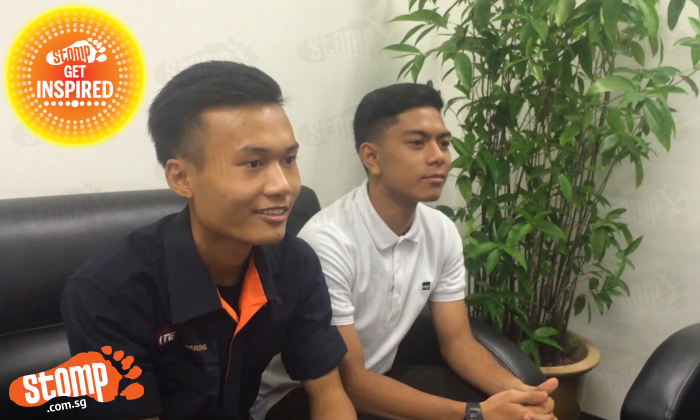 Two students were awarded the Public Spiritedness Award by the Singapore Civil Defence Force (SCDF) after they responded to not just one, but two calls for help in one day by cardiac arrest victims.

Stomp sat down with Mr Hairil Aidilfitri Johari, 19, and Mr Muhammad Adhwa Ahlami Johari,19, from the Institute of Technical Education (ITE) to talk about what happened that day (June 25)

It all started when they were in the National Civil Defence Cadet Corps (NCDCC) in secondary one, where they were trained to do first aid based on real-life situations. They are now cadet lieutenants, a position attained after they graduated from secondary school and went for further courses. They are certified in giving cardiopulmonary resuscitation (CPR) and using an automated external defibrillator (AED).

The youths are using an innovative mobile phone app by Singapore Civil Defence (SCDF) called myResponder. They have been using the app since its launch in April last year, and this is not their first life-saving attempt.

App users will be able to report incidents of cardiac arrest and receive notifications of cases within 400m of their location.

When asked what are their reasons for helping, they respond that it is just their "instinct".

"When someone is in need and you are able to help, so why not just help?" said Hairil.

The inspiring teens feels that we can do more than just look, and frequently encourage friends to download the app too -- especially those who are also trained first aiders.

When the teenagers arrived at the second victim's flat, they realised that family members were doing CPR wrongly. They took over.

The public-spirited students said that even if the notifications came in at the middle of the night, they would help whenever they can.

For the duo, it cannot be easy to find out that the people you tried to help did not make it.

"I was really hoping either one or both would make it," Hairil said.

He shared that he confided in his mother after the incident, who consoled him that what matters is that he did his best.

He imparted the same advice to other teens who have received first aid training.

"Don't be scared to help, the important thing is that you did your part," said Hairil. "Put yourself in the shoes of the victim, you would want someone to help instead of just walking past you or looking at you."

"By you being there and giving your help, it can be a big impact."

Wise words to learn from these youths.

For those wondering if this stint is only for trained professionals, first-hand training is actually not mandatory.

Untrained users can actually conduct phone-assisted CPR before the arrival of paramedics and usher them to the location. Every minute without intervention decreases the survival rate by 10 per cent.

The SCDF has encouraged the public to download the app.

Watch the interview in the video below.