Girl who used hijab to shield grandmother from rain speaks out about sudden fame: I now know how animals on exhibition feel 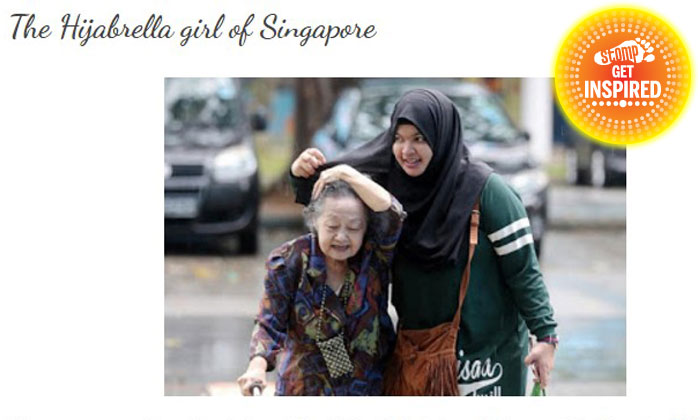 A Singapore woman became 'insta-famous' after a photo of her sheltering her grandmother from the rain using her hijab went viral on Instagram.

The photo was taken by a photographer from Today, Jason Quah and was posted on the publication's Instagram account on July 26 with the caption:

"A lady shelters an elderly woman from the rain with her head scarf at West Coast Drive."

The photo warmed the hearts of Singaporeans who initially thought that the two were strangers.

It was only later revealed that the 23-year-old woman, Sakinah Tan was actually the granddaughter of the elderly lady, Annie Loh, 78.

Although the post was met with mostly positive reactions by netizens, Sakinah has mixed feelings about the incident and wrote about it in a post on her blog titled, 'Neither here nor there: The Hijabrella girl of Singapore'.

She wrote that she felt exposed and violated because of some netizens who could not believe that the elderly woman was indeed her grandmother.

"I have grown up with both sets of grandparents; Malay and Chinese, an opportunity I am immensely grateful for, for 23 years now.

"My grandparents, whether or not they be Muslim or not, have taught me a great deal of things of how to be a loving Muslim from the way they accepted my parents' counter-intuitive fate of love.

"So I don't get why 1 photo suddenly flushes my family's beautiful history, of tolerance and patience, down the drain with insensitive comments like "Is the uploader dumb? they don't look the same".

She also felt that people suddenly felt like they had the right to judge her intentions after some netizens have even questioned if the photo was a set-up and accused her of working for the government.

However, she took the opportunity to shed light on issues like the struggles non-Malay Muslims face, interracial relationships and the lack of love shown to the elderly by the youth of today.

Several netizens have commended her candid post with one commenting that it should go viral too.

More About:
inspiring
get inspired
viral