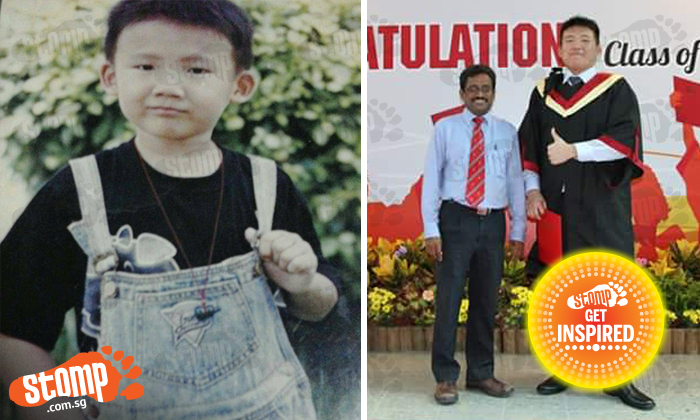 Teenagers these days complain incessantly about the heavy workload in school, having little time to relax, and the long list goes on.

But imagine having to shoulder all of that in addition to working multiple jobs to support your family, while still maintaining a perfect Grade Point Average (GPA).

Currently a second-year accountancy student at Ngee Ann Polytechnic, Po Hsiang was awarded with a bursary to recognise his outstanding academic performance.

However, things were not always as bright for Po Hsiang. It took a lot for him to get to where he is today.

Unlike most kids in Singapore, Po Hsiang did not have a very fortunate childhood.

Due to his family’s low income, he was unable to attend kindergarten and entered primary school not knowing a word of English. From asking for permission to go to the toilet to answering simple questions, everything was done in Mandarin, the only language he understood back then.

Yet, this never made him feel like the odd one out. In fact, he felt special.

"I feel somewhat unique and different from everyone. I remember going into Primary 1 without the ability to speak English,” said Po Hsiang.

Other lost opportunities include missing out on various adventure camps, school immersion trips and even giving up his first love: Swimming.

Ever since he was little, Po Hsiang has always loved swimming. To him, the sport is a form of escape to 'another world', where he is surrounded by nothing else but a body of water.

Having not been able to afford the class fees back then, he had no choice but to give it up.

At 15, he entered the workforce as a dishwasher where he did three shifts a week, but stopped soon after realising that the money earned was not enough.

Determined to support his family, he continued to work multiple odd jobs.

That was until he was 16, when he scored a stable and well-paying part-time job as a retail assistant.

Having to work four times a week, his job became a priority and he sacrificed on attending school to solely focus on supporting his loved ones.

It was not until he entered the Institute of Technical Education (ITE) then did he start to take his studies more seriously.

He made timetables to manage his schedule better, and studied as hard as he worked.

With no money to buy assessment books or practice papers, he depended on his own handwritten notes and revised everyday.

His efforts finally paid off when he entered his desired course in Ngee Ann Polytechnic, but the chase for success did not stop there. He continued to strive for better grades in hopes of getting a scholarship from the school.

Having devoted most of his time to his work and studies, Po Hsiang did not have the luxury of time to maintain a Co-Curricular Activity (CCA). He was thus denied a scholarship due to his insufficient CCA points, despite a perfect GPA score.

"Grades are given by the school and can only judge you as a student academic-wise, but life is a much bigger thing," said Po Hsiang.

Currently working two part-time jobs -- as a swimming instructor and retail assistant -- whilst juggling his studies, Po Hsiang continues to work hard and strive for success.

"I see myself contributing to society and being up there in the corporate ladder, having a stable income and able to bring my family a comfortable life," said Po Hsiang.

Watch the video to find out more about his struggles and how he overcame them.