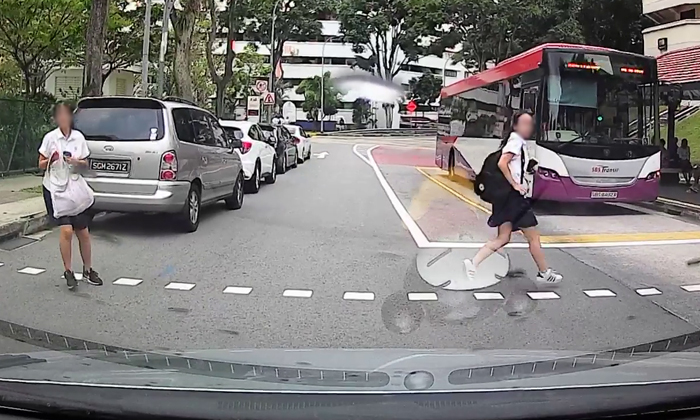 Things could have gone awry for a pair of schoolgirls who were caught on camera dashing across a road despite the traffic light not being in their favour.

Facebook user Fabian Chan posted a video of the incident that occurred in Bishan on Oct 10 after a near-accident with the two students.

Chan said in a caption: "Girls tried to dash for the bus without looking out for traffic, didn't help that my view was obstructed by all the illegally parked cars."

In the video, Chan can be seen approaching a green light when the two girls, who were in their school uniform, dashed out in front of his car.

One girl, who noticed the car before her companion did, retreated her steps.

Meanwhile, the other girl is seen turning to look at Chan as she continued running towards the other side of the road.

Both students appear visibly shocked by the encounter.

This comes after a similar incident where a three-year-old boy was run over by a car after dashing across the road along Depot Walk on Oct 5. He suffered minor injuries and was reported to be in stable condition.

Related Stories
3-year-old boy who got run over by car at Depot Walk in stable condition, police investigating
Toddler gets run over by car after dashing out to road in heart-stopping video
'I nearly lost my driving licence and killed this kid who dashed across road'
Boy who dashed across road in Hougang 'might not be so lucky next time'
Child nearly hit by car as he dashes across road at Punggol
Young boy dashes across road in Tampines, allegedly under maid's supervision
More About:
students
Youths behaving badly
near-accident
dangerous
pedestrian
jaywalk
jaywalking