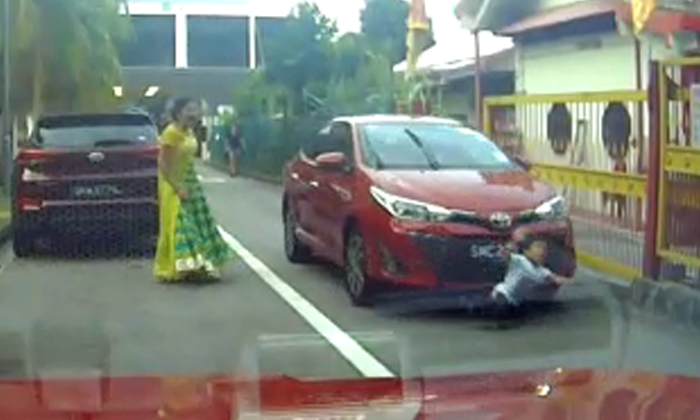 3-year-old boy who got run over by car at Depot Road in stable condition, police investigating

A boy was seen getting run over by a car after he dashed out to the road in a shocking video that has been circulating online.

The incident is believed to have occurred on Saturday evening (Oct 5), in between Sri Ruthra Kaliamman Temple and Qi Tian Tan Temple.

The video, posted by Facebook page District Singapore on Sunday, has since garnered more than 1,400 shares and almost 400 comments.

In the minute-long clip, a group of two women and two children can be seen walking along the pavement outside Sri Ruthra Kaliamman Temple.

A boy then breaks away from the group and runs out to the road, with one of the women going after him.

However, an oncoming red car knocks down the boy right in front of the woman's eyes before she can reach him.

The boy can be seen trying to get up and appears to have trouble standing on his own, though it is unclear whether he was hurt.

In response to the video, many netizens urged parents to hold their children's hands when crossing roads as well as educate them on road safety.

A few also felt that the driver of the red car should not be blamed due to the blind spot.

One user added: "Not blaming the cam driver, but from the video, for drivers in similar situation, we can hork and alert all parties."