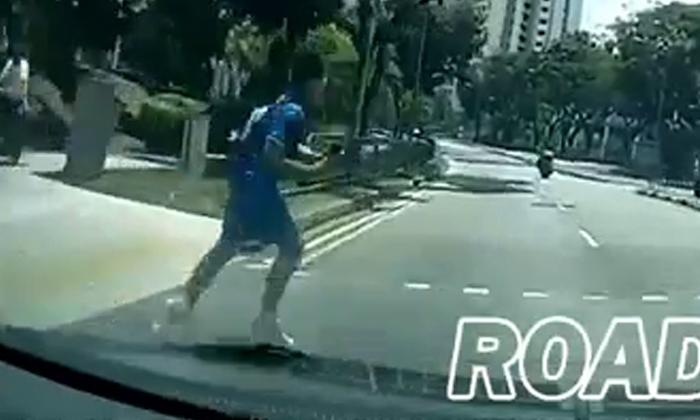 A boy was caught on camera dashing across the road despite the traffic light not being in his favour, narrowly avoiding getting hit by a car.

A video of the near-accident, which occurred along Bedok Reservoir Road on Tuesday afternoon (March 19), was posted by ROADS.sg on Facebook.

A caption accompanying the video said: "What the hell.

"I nearly lost my driving license and killed this kid. He stepped onto the pedestrian crossing blindly and into my path when the light was green in my favour."

In the video, the driver can be seen making a sudden swerve to the right to avoid the running boy.

This incident is the latest in a spate of reports involving pedestrians jaywalking and dashing across the road recklessly.

In a separate case on Feb 26, a Stomper shared how a boy who dashed across his vehicle in Hougang 'might not be so lucky next time'.

Similarly, Stomper DL said a woman who ran out in front of his Range Rover from a blind spot on March 12 'could have died'.

A video showing an elderly woman jaywalking at Eu Tong Sen Street on March 9 has also sparked debate on who is to blame in the event of an accident.

Related Stories
Woman who dashed out in front of Range Rover from blind spot 'could have died'
Boy who dashed across road in Hougang 'might not be so lucky next time'
Auntie jaywalks at Eu Tong Sen Street: Who's to blame if she gets knocked down?
More About:
dangerous
child
Youths behaving badly
jaywalk
pedestrian